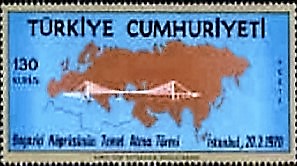 The Muslim world couldn’t care less about the UE taking Turkey nor not (Franck Biancheri, 2004)

08/12/2004 – Contrary to what promoters of Turkey’s entry in the EU, short of arguments, repeat, this decision would not improve the relations between the EU and the Muslim world; in fact it would probably deteriorate them.

I have already explained in these pages why I think the restrictive perspective of taking Turkey aboard the EU will empower populist and xenophobic parties all over our countries. No need to be very insightful to understand that this development would strengthen anti-Muslim feelings among many sectors of European society, see among governments themselves. Therefore I will not come back on this aspect of the question.

But I would like to spend some time today on this great lie repeated all over the media and in the conference rooms: “Making the decision to take Turkey in the EU will improve the relations between the EU and the Muslim world”.

Such sentence seems perfectly logical: the EU which gathers countries of Christian tradition opens to a country of Muslim tradition, thus proving to the Muslim world that it is open to other religions.

On the one hand the EU does not define itself in terms of religious identity. Therefore I do not buy the first predicate claiming that we would be seen as a “Christian Club”. It is not the case; and to those who think so we must “explain why they are wrong rather” than “prove that they are wrong”. We have nothing to prove in this matter.
On the other hand, who in the Muslim world ever asked for such a proof? I would be interested if one of them « beautiful minds » who dream of an EU bridging civilisations, could tell me what Muslim (non-Turk of course) ever asked the EU to take Turkey as a proof of its not being an anti-Muslim entity? Indeed this argument is repeated all along entire articles by a number of very European personalities self-proclaimed spokesmen of the « Muslim masses », just like they did yesterday with the « popular masses »

Speaking for myself, though I have known the Muslim world for many years now, I have never met one. Worse than that, I have learnt one thing during my wandering around the Arab world: the Arabs do not like the Turks (nor the Turks like the Arabs) as a result of the centuries of domination by the Ottoman Empire. In fact the other Muslims couldn’t care less about the Turkish entry in the EU. Quite the contrary, many Muslims would resent very much this EU expansion, which (to use a term cherished by our «beautiful minds») will remain for them a Christian club moreover endowed with a Muslim mercenary, Turkey.

Of course, as no single principle of reality justifies Turkish EU-accession in a near future, its promoters end up using more and more absurd arguments. The next super-realistic explanation could for instance be that Turkey’s entry would supply the EU in human resources for oil-digging in Siberia and prevent China to put their hand on it. You’re smiling? Well, you shouldn’t ! That’s what Michel Rocard, an ardent promoter of Turkish EU-entry, argued during a meeting that I attended in Lyon prior to the last European elections.

Previous: Two examples of new key EU security interests linked with next US elections (Franck Biancheri, 2004)
Next: US Isolation: When global finance turns away from the dollar system, it means the cliff is near (GEAB Oct.2016)