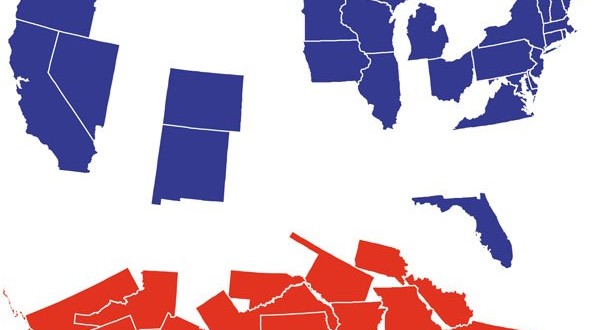 On eve of a historical US election, it is worth reading again what Franck Biancheri was advising to EU leaders in the face of the uncertainty conveyed by the 2004 election (Kerry-Bush). This article is one more striking example of his lucidity. It is difficult to know today how much the EU has prepared itself to the outcome of an election that, whichever the result, will signal a drawback from the progressive stance introduced by Barack Obama’s presidency. Risks are blatantly greater today : geopolitic, financial, economic, political, social and of course security… But it is just a lot more of what was already on the table in 2004… In 2016, is the EU prepared to post-US election uncertainty ?

26/09/2004 – Contrarily to most European comments on the topic of US November 2004 elections, I will try to raise a few key EU interests which are not dependent upon the elections results. Who ever from Kerry or Bush is next US president, the EU has some of its key interests at stake in that short term US future, namely contributing to secure a smooth US election process and to prevent a global economic and financial crisis if it is not the case.

First of all, the first risk will be the elections themselves. Not in terms of who wins, but in terms of how the next Us president will become the winner. Florida’s elections 2000 flaws and its consequences (recount, decision by the Supreme Court, …) may have been only a small scale repetition of what could happen next November. What  matters first for the EU is that a US president is elected in 6 weeks time and that he is duly elected with no suspicion of fraud or manipulation. Why? Because the EU needs to have a stable, legitimate partner on the other side of the ocean and because, if the election is tainted with similar suspicions as in 2000, this time it will generate a very high level of disturbances within the US. The polarization of the electorate is so high that most likely anything but a fair and well organised election could trigger internal instability in the country’s political system. Bluntly said, it is not certain that in such a case, the ‘other side’ will calmly accept the result, thus creating a very delicate situation for the EU as well.  So first interest for the EU: contributing to secure the legitimacy of the election process. The involvement of OSCE observers is a good thing. But the EU must prepare itself to have to adopt a common stance if the election does not take place as smoothly as one may hope.

Second, and in direct connection with the previous point,  the EU must get prepared to possibly face a very unstable international environment around the US election date. And I do not only speak here of possible terrorist attacks. I have in mind the financial and economic consequences of any political instability within the US, following a possible complex election process with no clear president elected on November 3rd. The world has changed a lot since 2000 and the US relations with this world have changed even more. Any disturbance within the power transition in the US, at a time of war in Iraq and Afghanistan, of high tensions with Iran and North Korea, of terrorists global threats, of ballooning US deficits will immediately generate a volatile situation of world financial markets and world consumers confidence. So to speak, it could trigger a major economic and/or financial crisis because we are today (contrarily to 2000) in a very fragile global situation. Today’s US is more than ever dependent upon the goodwill of Chinese, Japanese and European investors to pay for its deficits (each of the three represents about 100 billions dollars of the 2003 US trade deficit). The key component of this process is called ‘trust’. If trust in the US system, which is much weaker than before September 11th, is suddenly put in question, consequences can be devastating. The European leaders as well as European Central bankers should try to get their colleagues in China and Japan to anticipate such potential risks and to develop joint policies aiming at preserving stability.

The fact that we all hope that the 2004 US election will go smoothly should not prevent us to look at the way things are and get ready for less optimistic scenarios. It also requires a mentality change within European leaders. If they seriously want to be the partners of the US in coming years they have to act as such. One expects from his/her partner that he/she anticipates problems affecting the two of them. That’s what the EU has to do in the coming 6 weeks.

Previous: American Election – Brexit – Euroland – TTIP – Turkey – Russian Sanctions: What future is there for the European Commission… (GEAB Sept. 2016)
Next: The Muslim world couldn’t care less about the UE taking Turkey nor not (Franck Biancheri, 2004)