From a single currency to a single citizenship (Franck Biancheri, 1997)

The move to a single currency is not only the most important economic challenge the European Union has taken on in its forty years of existence, but it is above all the most significant political challenge it has ever faced.

The euro is only an instrument, neutral in itself. lt is therefore useless to reject it out of hand or to praise it to the skies. lt will serve Europe according to how the politicians and peoples of Europe use it. 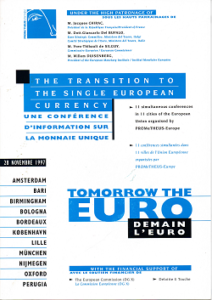 Welcome address by Franck Biancheri for the Euro-conferences of 28 November 1997: “Tomorrow the Euro”

The move to a single currency is not only the most important economic challenge the European Union has taken on in its forty years of existence, but it is above all the most significant political challenge it has ever faced.

The technical aspects of the adoption of a single currency are quite complex, and will thus require a significant information effort on the part of European, national and local public bodies directed towards 350 million citizens. But these aspects are only a small part of the obstacle on the road to a single currency.

For PROMETHEUS-EUROPE, the most important of these is a political challenge, namely convincing public opinion of the logic of the necessity of a single currency. Although the Maastricht Treaty makes the passage to a single currency legally unstoppable, this change in public opinion is needed as as soon as possible. By separating in the minds of the public the ideas of euro and austerity, it is the only thing that can give politicians a margin for action to continue the policies of austerity and budget balancing that they have begun.

Following this change in public opinion, we can hope that in the future that the real logic behind the single currency will be discovered. There are two simple but essential principles, discipline and solidarity :

Beyond the economic and monetary aspects, the single currency should in fact lead to a real evolution of ideas. Without this evolution the process will fail. If the people do not agree to the process, the politicians will abandon the rules to avoid electoral problems.

ln order to obtain the agreement of European citizens, PROMETHEUS-EUROPE thinks it essential to recall a key element, a point that will be repeated in all our conferences “Tomorrow the Euro” across the EU. The euro is only an instrument, neutral in itself. lt is therefore useless to reject it out of hand or to praise it to the skies. lt will serve Europe according to how the politicians and peoples of Europe use it. lt could prove a powerful instrument capable of ensuring longevity and a significant place for the EU in the world, and of imposing the political developments that are needed for citizens to control the European integration process. On the other hand, if the new instrument is poorly managed, and the democratic opportunities are lost, then the inevitable turbulence of the passage to a single curerency could pose problems for the whole project of Eureopean integration.

It is essential therefore that, in the context of the single currency project, everyone should express their daims in the right direction :

The euro is already on its way, and to a great extent the future of European integration is already linked to its success or failure. PROMETHEUS-EUROPE wishes for one thing: that it should not cristallise all the criticisms and disappointments concerning the EU. lt should, on the contrary, unite those who believe that the worst outcome would be that the EU fails to respond to this great challenge.

The euro era, after 2002, will no doubt be an era of rethinking and reconstruction of the non-monetary and economic part of the European edifice. ln order to construct a Europe that is more open, more transparent, more efficient and more democratic as PROMETHEUS-EUROPE would wish, it will have to be built on two solid props : the single market and the single currency.

The first was built in 1992, the second should be complete in 2002. When these two props are built, the young generation of Europeans can work towards giving the EU the human face that everyone expects.

This is the ultimate goal of the action entitled « Tomorrow the Euro » that PROMETHEUS-EUROPE has launched with the support of the European Commission, and which will affect 70.000 organisations in 23 towns in 14 Member States. For this project I would particularly like to thank the project co-ordinator Leandra Vatri and trainee Thessa Romani de Wit. Their decisive and voluntary efforts have allowed these conferences to take place, but they were supported by many other members of PROMETHEUS-EUROPE and dozens of organisations. The project proves one thing, that money, volunteer and Europe can work well together : maybe a good indication for the future !

Franck Biancheri (1997), President of PROMETHEUS-EUROPE: Message of greetings on the Euro-conferences “Tomorrow the Euro” organized by Prometheus-Europe on November 28, 1997: download the booklet in pdf format

-> You can buy the Special review “Euroland at a crossroads” by LEAP2020 in electronic format, on Anticipolis for 5 euros:

Previous: Tomorrow the Euro, the transition to the single European currency. A series of twelve Euro-conferences (Prometheus-Europe,1997)
Next: The euro is only an instrument…