The idea of creating AEGEE-EUROPE was not then just to create a new European student movement, but rather to initiate an entirely new approach to the construction of Europe by starting off with young people and citizens, skirting around the nation states, and thus completing the EC process that had begun in 1957. 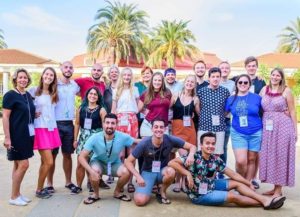 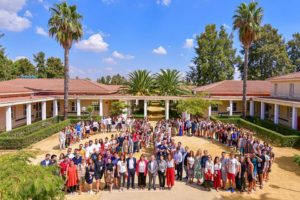 Back from Mollina, where Marie-Hélène Caillol and Marianne Ranke-Cormier were invited by AEGEE-Europe as part of the special FB Award Europe2040 to animate four sessions on Youth Participation and Democracy “Capitalizing youth empowerment! Action seminar” that took place at the 20th edition of the University of Youth and Development (UYD). Combining the fate of a democratic Europe in 2040 with the future of one of the biggest European students network that was created 35 years ago by Franck Biancheri, understanding where you come from, what you stand for, what are the challenges you have to face in this new century, building the youth perspective proposed by AEGEE on the method of political anticipation, is a quite brainstorming exercise, the students of Aegee had to tackle two days along. Four sessions conducted by Marie-Hélène Caillol, president of LEAP, illustrated by examples from the history of Aegee including the little blue book “THE EMERGENCE OF EUROCITIZENS – A brief history of AEGEE-EUROPE, from its creation to April 1988” written by Franck Biancheri in 1996, of which we publish extracts below. Because “AEGEE was indeed genetically programmed to be anything but “a simple European student movement”“… let us remember some fundamentals.

[…/…] As we contemplated the decrepit splendours of our nation states, impervious to the perverse charms of the two dominant empires, we were convinced that we had to create a new path to the future by organising Europeans in a different way, so as to be able to face up to the problems awaiting our generation with improved chances of success.

This path, combining the principles of action (voluntary work and efficiency) with ideal values (democracy, independence, transparency), would only lead ussomewhere if we planned it out ourselves.

We were deeply convinced of the path to be followed: a narrow passage thrusting forward into that space where individual and community counterbalance each other, a Via Europea by excellence.

So, without fixing our sights on any ideal heights, aware that henceforth, in achanging world, to follow your own path is more important that attempting (always in vain) to reach a “brighter tomorrow”, we set off.

As everybody can see, it was indeed a political project from the very start, and a very ambitious one; political in the noblest sense of the word.

The AEGEE-EUROPE idea was therefore of a complexity far superior to that of a simple European student movement in the making. It did indeed possess some additional characteristics:

– A specific approach, that from the beginning we named “pragmatic utopianism”, which pushes you to create means to serve your objectives and not to define your objectives according to the means in your possession.

These characteristics are rooted in the first three years of AEGEE-EUROPE and shaped the collective behavior of several hundred of us (more particularly those who were involved at the European level). Later on this was also what placed AEGEE-EUROPE in serious dilemmas as to its identity; AEGEE was indeed genetically programmed to be anything but “a simple European student movement” […/…]

[Second extract from: Never did so many (European students) owe so much to so few – p28]

[…/…] In practical and intellectual terms, that is how AEGEE-EUROPE began.

The immense difficulties that we successfully managed to overcome since the founding congress established four characteristics of AEGEE-EUROPE for its first three years:

A brief history of AEGEE-EUROPE, from its creation to April 1988“

10:15 PM
Marianne Ranke Cormier
Previous: GEAB in September: Bolton – World – US 2020: An American Perestroika… Questioning certainties
Next: Meeting with Jacques Chirac: from Newropeans2000 to the French referendum on the European Constitution.