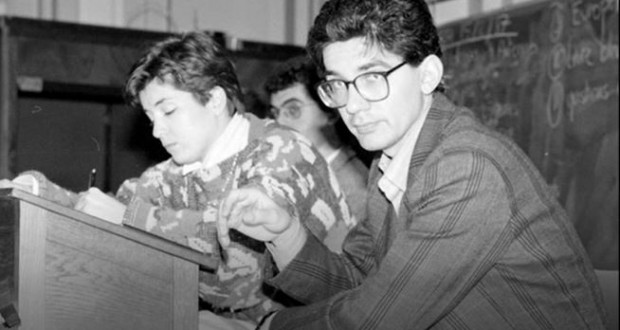 April 2010, Marianne Ranke-Cormier made a series of interviews of some of the main actors involved in the organisation of EGEE1 and so to revist this very first fantastic week and to reconnect with them. We republish these interviews during this week of 35th anniversary. One of these interviews was with Tanja Masson-Zwaan, who became an Officer in de Orde van Oranje Nassau.

¤ At the time what studies did you do?
Tanja Masson-Zwaan: International law at Leiden University, I was almost at the end of my studies (graduated Oct 85).

¤ What was your role in the organization of EGEE1?
Tanja Masson-Zwaan: I did not organise EGEE1, Franck Biancheri came to see me in Leiden. I was on the board of the Telders student debating society and a Telders alumnus working in the Dutch embassy in Paris had given Franck our contact details – as I spoke French, I met him and agreed to organise a small group of students to go to Paris in April 1985; of course I also joined. After that I was strongly involved in the further development of the organisation and became Secretary General of the first CD

¤ What did motivate you to take part in the organization of this event?
Tanja Masson-Zwaan: I attended EGEE1 because the ideas of Franck were stimulating, new and interesting. At first we did not really know how to react to this very enthusiastic French student, but it was impossible not to agree with his plans and ideas and so we went along and became as motivated as he was. Of course the idea of participating in a great congress and parties in Paris was also very attractive.

¤ Tell me about the 16th of April, how did you feel about the launch of EGEE1?
Tanja Masson-Zwaan: It was a great feeling to be a part of it. We felt special. I could never have imagined at that time that 25 years later it would have grown to such an incredibly large and influential organisation.

¤ What happened during the week?
Tanja Masson-Zwaan: I admit that I don’t have a very clear recollection of the lectures, or where we stayed, or what the days looked like, but I do recall the great parties in beautiful Paris.

¤ What was for you the most important achievement of this event?
Tanja Masson-Zwaan: The bringing together of a small but very dedicated and active group of friends with whom I spent an amazing few years traveling through Europe, interacting with other Europeans, creating unbreakable bonds and, apparently, doing some good work in bringing young Europeans together in an organisation without national delimitations. This was a brilliant and visionary decision.

¤ What is your best memory?
Tanja Masson-Zwaan: Everything…

¤ The worse one?
Tanja Masson-Zwaan: The fights we sometimes had, but they were necessary to reach common understandings, so they are not really a bad memory. I had actually left the CD when problems started to arise after the first 2 or 3 years, as I had started working already in October 1985 and it became increasingly difficult to combine AEGEE with my work at the university. I guess I am lucky to have only happy memories.

¤ Why did this congress decide you to start building the Aegee network?
Tanja Masson-Zwaan: We just could not stop there, we had work to do, and the dynamics of the group were very strong. It was new, it was fun, it was necessary.

¤ Can you tell me what was for you the dimension of the event? (Before/after)
Tanja Masson-Zwaan: Before: mostly for fun. After: a mission

¤ Did you anticipated its political dimension?
Tanja Masson-Zwaan: No I had no idea of the impact we would have

¤ For the future of the students in Europe?
Tanja Masson-Zwaan: same

¤ From this experience which recommendations would you give to the younger generations in Europe today?
Tanja Masson-Zwaan: Exchange, travel, listen, interact, understand, be tolerant, enjoy, learn your languages!!

¤ What are you doing today
Tanja Masson-Zwaan: I work again at the Faculty of Law, University of Leiden, at the International Institute of Air & Space Law (www.iiasl.aero) where I started working right after EGEE1.Meanwhile I had lived abroad for nearly 15 years in France and Singapore. I am also president of the International Institute of Space Law (www.iislweb.org) and in this context I am always working with people from lots of different nationalities and cultures; My years with AEGEE have been very useful. I am married to a French / Swiss (with whom I was already at the time of EGEE1 this is why I spoke French …), we have four children, one is studying in Switzerland and the others are in the “Lycée Français” in The Hague. I encourage my children as much as possible to participate in Models United Nations, like THIMUN (The Hague International Model United Nations) or MFNU (Modèle Francophone des Nations Unies), or any other opportunity to broaden their horizons, because I know how important that is.