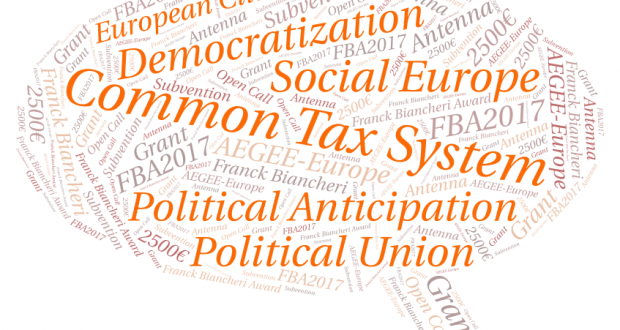 Two events prompt us to republish today this text of Franck Biancheri written in May 2001. Firstly because the project of the antenna AEGEE-Budapest, winner of the Franck Biancheri Award 2017, on the theme “Educate now, Democratize the future”, take roots in this text in which Franck Biancheri foresaw the risks of non-democratic deviation arising from the foundations of the EU. Indeed, AEGEE-Budapest considers that the lack of civic education is leading to the rise of populism and extreme ideas as well as to a return of hate and separatist movements. Furthermore, this unstable moment of crisis is linked to a democratic deficit and a breach between the citizens and the institutions. This cycle has to be broken to make young people’s voices heard. (Read our article: AEGEE-Budapest wins the Franck Biancheri Award 2017 !). Second, because our campaign “Organising the first Trans-European Election“ addressing the European Leaders, the Franck Biancheri network has just launched with an open letter “Countering the British “Coup d’Etats” with a European democratic blow – Towards a first real trans-European election” is our will to continue his relentless struggle for European democratization facing the collapse of the European system. Each of us has to undetstand thats it’s time to defend a democratic vision of the future of Europe.

Empower or legitimize the European Institutions

The discourse on the future of the EU is full of references to empowerment of a particular institutions. For one it will be the Commission for others the Parliament or the Council. In any case, the key concept that dominates the succession of monologues about the future of the Union is “strengthening institutions”. This “strengthening” aims to give more power (in more domains or in more important domains, depending on the variants) to the institutions concerned. It is supposed to meet the following diagnosis: the EU is going bad, the Euro is approaching, people are suspicious and worried, institutions are no longer credible. Remedy: strengthening the powers of the institutions!

Take the time to analyze this statement: strengthening the powers of the European institution is the solution to restore confidence in the EU and the functioning of the EU itself.

What unspoken assumptions inthis statement. Forget the question of “what powers ?” to focus on the assumption that these “powers” are intended to act, to have an impact (otherwise why strengthen them). Firstly, we can discover who writes the speeches of heads of government or the commissaries: the staff. No surprise in this revelation. But a disturbing political observation. Indeed, the strengthening of the powers of any organization can not re-legitimize and improve the effectiveness of its action in the context of a non-democratic environment, where a higher authority determines the level of authority of influence and power. It is by definition the very mode of operation of an administration, a bureaucracy where power determines almost alone the capacity for action.

In a democracy, in the modern political world, it is not the level of power that determines the capacity for action, but the legitimacy of the body which exercises and those who run it (because then it naturally attracts the power necessary for the exercise of its functions). And legitimacy in all our democracies tends increasingly to be embodied primarily by citizens directly (even when it is filtered by parliamentary elections).

This shows that most of the discourse on the future of the EU is based on a pure bureaucratic logic, whose policies are relays, which completely ignores the political dimension of the problem and therefore calls for solutions that are in fact the problem.

Indeed, if the diagnosis of European leaders remains unquestioned then the current approach forgets that any solution must now intervene in a political and democratic framework (the Euro will accelerate this trend). It is not so much to make institutional meccano or play the NGOs plan reform (remember how the USSR struggled with the problem of administrative efficiency and institutional reform over the past two decades before they fall) that would rebuild the citizens/peoples contract of the EU and the EU itself.

It is to re-legitimize a massive institutional apparatus that has lost its meaning and the people’s trust. Strengthen a particular component will only increase the gap with people. And do not forget that part of the administrative community (in Brussels and in national ministries) does only one thing: keep control of the EU… without realizing that doing so increases the problems of the EU. So much for the argument of the enlargement and the complexity of the EU to 20 or 25 (which feed many reflections on empowerment) is nothing more than a bureaucratic artifice – to prevent institutional challenge of today’s EU community bureaucratic model. Attempts to create debates with all 25 member States to find solutions to a problem today that 15 or even 12 can’t handle is unfair and reflects the desire not to change.

Policies must keep in mind that in a democracy they are “elected representatives” … including control authorities and guide their action. Behind the debate of “empowerment” or “re-legitimization of institutions “there is a fundamental democratic debate that is open to more than 300 million Europeans. And must betreated now even if part of the bureaucracy believes that DEMOCRACY IS SOLUBLE IN ENLARGEMENT. Enlargement is indeed some new stage where the bureaucracy can become all-powerful over European affairs.

Today the EU citizens are waiting. They expect a political discourse, combining pragmatism and boldness of the method in the questioning, speaking their “European language” (the problems, not the bureaucratic solutions) and giving them a role in the European game. Tomorrow, the Euro will set in motion unpredictable socio-political forces across the EU and the issue of legitimacy will become central.

12:48 PM
Marianne Ranke-Cormier
Previous: The 10 Lessons from the election of Donald Trump (Cyril Castro, Nov. 22nd, 2016)
Next: Letter from Carla Biancheri to protect her father’s memory