Don´t miss
Home / FB Doc Selection / Upon whom will the ashes of Baghdad fall down? (Franck Biancheri, 2003) 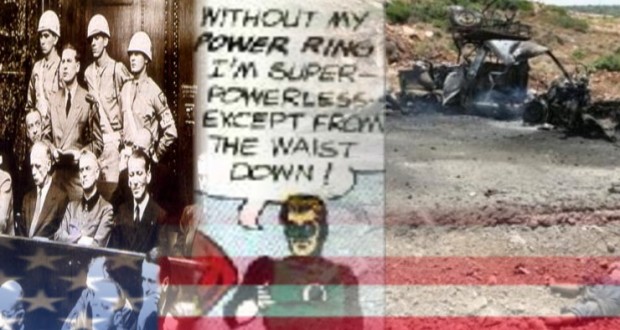 Upon whom will the ashes of Baghdad fall down? (Franck Biancheri, 2003)

Gulf War II, as already many signs indicate it, will mark the end of the era opened after WW II and ends up the ‘era of superpowers’.

Written shortly before the second war in Iraq this article warns US, but especially Europe on its consequences, durable and dangerous... Just looking at the world situation today, 13 years later, and we can only deplore the accuracy of Franck Biancheri. The ashes of Baghdad have not finished falling, we live nothing but a terrible chaos but especially the great collapse of the United States (not just the moral credibility, patiently built up by generations of Americans…, as Trump knows, and Clinton wants to ignore). Today, 13 years later, we are still stucked in Iraq and its region… Just let us remember what Franck Biancheri wrote…

Upon whom will the ashes of Baghdad fall down?

Let’s get a bigger picture and look at consequences on the Transatlantic relations as well as on each side of the Atlantic Ocean. The growing complexity of EU/US relations will enter into a process of simplification in the coming months with coming Gulf War II. This war will only leave three main gates to enter our common future.

The Gate to Heaven? The US administration’s perfect war

Gulf War II is ‘the perfect war’ as planned by US and UK officials. A few weeks of combat with limited military casualties on the US/UK side and limited civilian casualties on Iraqi side. Then, in a matter of six months, the stabilization of Iraq allows a peaceful process of transmission of powers to a new civilian democratic Iraqi regime, while a renewed peace process in the Middle East opens a new era of stability and peace for the whole region and the world.

If this scenario becomes reality, then the consequences are pretty obvious:

The Gate to Hell? The US Administration war nightmare

Gulf war II is the “mother of all nightmares” as expected by Saddam and feared by many around the world (including in the US and Europe). This is the exact opposite outcome compared to the previous one. The war has to last more than a few weeks as Iraq is not rapidly secured by US forces. Months after the invasion, the country is still split in chaos with various groups (Saddam loyalists, religious or ethnic groups, …) fighting among each other and with the US/UK forces. Death toll of Iraqi civilians goes up by thousands every month; while hundreds of US and UK soldiers get killed or wounded. Neighbouring countries enter the game in order to take their share of Iraq or to prevent chaos to enter their own borders. Oil prices rocket to the sky and trigger a worldwide deep recession. Terrorists attacks are perpetrated against US and Western interests in the world. Israel/Palestine relations move towards an even greater level of conflict. Only half of these possibilities do represent a nightmare scenario. Not only for the US but for the whole international community.

The Gate to tomorrow’s world? The US landing painfully into history, with the UN to rebuild

Gulf War II, as already many signs indicate it, will mark the end of the era opened after WW II and ends up the ‘era of superpowers’. Globalization shows the limits of any power, even the biggest one.

Probably, history will follow a path somewhere in between the two previous scenarios, combining elements of both. But even in that case, some major consequences may be identified:

(Illustration of the article by Franck Biancheri 2003)

The French version of this article by Franck Biancheri (Sur qui retomberont les cendres de Bagdad?) was published in the letter of Club 2020 – February 2003, a monthly publication by the think-tank Europe2020 (now LEAP2020) distributed to national and European policy makers -the ancestor of the GEAB somehow. In the English version  written later, in March 2003, Franck Biancheri built his proactive analysis of the consequences of the second Iraq war in the form of the three scenarios above.

Download pdf file: Upon whom will the ashes of Baghdad fall down? (Franck Biancheri, 2003)