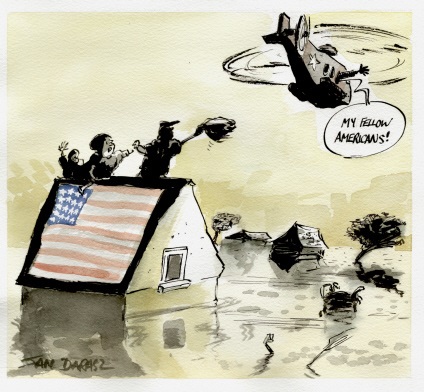 The world was totally shocked and horrified by the disastrous show caused by Hurricane Katrina. A different America was exposed there… Beyond the material damage, the human misery emerged from the TV broadcasted images… and the revelation of the weaknesses of the American governance, which took a long time to figure out the magnitude of the disaster and react effectively…

Harvey, the storm devasting Houston and ravaging the region on its way to Louisiana these days, sadly has a taste of déjà vu, and we could take word for word what Franck Biancheri wrote in September 2005 about the storm Katrina. Yet in Houston, as in New Orleans 12 years ago, it was known that this storm was going to happen … We invite you to re-read the conclusions that Franck Biancheri drew from the lesson of Katrina in 2005:

The world was totally shocked and horrified by the disastrous show caused by Hurricane Katrina. A different America was exposed there, that of the poor black population in Louisiana who had no car to flee. Beyond the material damage, the human misery emerged from the TV broadcasted images… and the revelation of the weaknesses of the American governance, which took a long time to figure out the magnitude of the disaster and react effectively. Everything has been said already on this subject, especially within the American media, and mainly by black journalists. There will definitely be some political consequences to all of that.

Nevertheless, before attending any great political debate, one can ask about connections between foresight and political action, since in this case the scenario was known and was announced with remarkable precision.

In 2004, a risk assessment specialist described quite in detail the “almost unimaginable” dangers faced by the people of New Orleans. No one had listened to her1.

In September 2004, Shirley Laska wrote about Hurricane Ivan as follows:

“New Orleans was spared, this time, but had it not been, Hurricane Ivan would have:

The warning was clear, black on white:

“For those without means, the medically challenged, residents without personal transportation, and the homeless, evacuation requires significant assistance”.

Shirley Laska said further on, about Ivan, in 2004

“Residents who did not have personal transportation were unable to evacuate even if they wanted to. Approximately 120,000 residents (51,000 housing units × 2.4 persons per unit) do not have cars. A proposal made after the evacuation for Hurricane Georges to use public transit buses to assist in their evacuation out of the city was not implemented for Ivan. If Ivan had struck New Orleans directly, it is estimated that 40–60,000 residents of the area would have perished.”

The article was also speaking of people able to flee, but who refused to:

“Researchers have estimated that prior to a “big one,” approximately 700,000 residents of the greater New Orleans area (out of 1.2 million) would evacuate”, wrote Mrs Laska. “In the case of Hurricane Ivan, officials estimate that up to 600,000 evacuated from metropolitan New Orleans between daybreak on Monday, September 13 and noon on Wednesday, September 15, when the storm turned and major roads finally started to clear. The fact that 600,000 residents evacuated means an equal number did not. Recent evacuation surveys show that two-thirds of nonevacuees with the means to evacuate chose not to leave because they felt safe in their homes. Other nonevacuees with means relied on a cultural tradition of not leaving or were discouraged by negative experiences with past evacuations”.

This was not about multiple-future foresight, but a single future forward-looking, based on the extrapolation of the recent past. Hence, beyond the classic complaints of the futurists “If we had been listened to”, we must go to the sources of this improvidence.

The organised reaction was not prepared because infrastructure protection measures were not part of the political agendas2, and the latter were not the translation of a poverty eradication society project. What is at stake is not only the authorities’ incompetence, the cumbersome bureaucracy, the lack of coordination of the echelons of the constitutional structure, but the vision of American society on itself. Apparently, this is not rampant racism, or rampant corruption, explaining the lack of political interest for the inhabitants of the damaged areas, nor the stereotypes of New Orleans3 films and jazz in American public opinion. It is the autism of rich people and their political representatives. Where did those black people come from? We did not know them, and they were disturbing the image of the reassuring liberal America, where everyone had a chance to live the American dream. They were not refugees4, but Americans in misery.

What to conclude from this major event? In my opinion, the great challenge of foresight and politics is to articulate long-term vision, medium-term programme and short-term action. This implies a new praxeology from both foresight and politics. Reactivity can be thought out in advance, 3-5 year long medium-term programmes must be at the confluence of the problems experienced in the present and the guidance of the general orientation of a self-constructed societal programme with the citizens. The debate on the finalities becomes the essential point5. Man and Humanity, and therefore the anthropo, would be the centre and the reason of being; hence the project under development of the “Anthropolitical Prospective”.

A leader’s vision is more and more needed, but it is not a hundred percent safe. Thus Lenin had the vision that the Bolshevik revolution would burn the global proletariat and that a series of revolutions would occur in Europe. There were many attempts in Germany, Austria and Hungary, but they were just straw fires, which led to the construction of socialism in one country, and to improvising strategic retreats with the New Economic Policy (NEP), in particular … and to the tragic drift of the USSR.

Today, any vision must be shared and participative at citizen level. This raises the question of the connection between representative and participative democracy, and it allows Hugues de Jouvenel to answer it like this:

2 We know, moreover, that money amounts had been transferred to military expenditure in Iraq

5 I am thinking mainly of the current debates on a programme of the Socialist Party in France and more generally on the French left wing where identity is the real issue.

Previous: When the South burns, the holidays of the northern Europeans go up in smoke …
Next: European Transnational Lists, a real good progressive idea! (Marianne Ranke-Cormier)