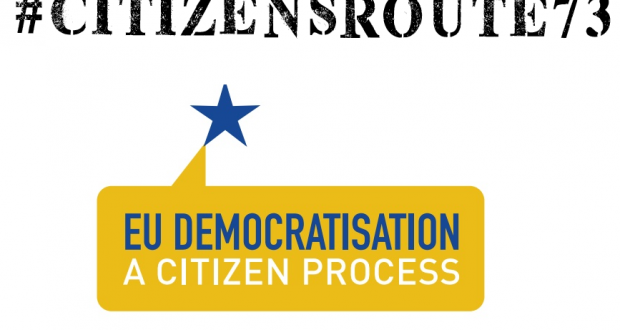 Posted by: Marianne Ranke-Cormier in Tribune 09:16 AM

Because future belongs to European ideas and projects in politics as well as in other domains (Franck Biancheri in “Eurocitoyens versus national parties, the game has started” – 1987)

I will not even mention the link to the article “Transnational Lists, a false good idea”, published by the Taurillon, to which I decided to react today. An article signed by a Swiss author, as if in Europe we no longer had thinkers and intellectuals capable of imagining the tools which would be best for us to manage the invention of centuries: European democracy.

Yes, the Swiss, and they are not the only ones lecturing Europe about how to manage a 500-million-citizen democracy. Switzerland, with its 8 million inhabitants, whose citizens refuse to join the EU, but at the same time profiting largely from its financial woes; citizens who suffer from all forms of extremism and citizenship issues, the death of their traditional political parties by abandonment, whose cantons are totally unable to agree on immigration policies …

And which European parties are they talking about? From this aggregate of political groups in the European Parliament… whose deputies are not even the representatives of the majority of their own country … who can’t even agree on the same social, liberal political lines and whose voting rules are anything but democratic!

Well, that is precisely what Switzerland is willing to offer, the emergence of populism, extremism and sovereignism within the next European Parliament as the first European party. They should not even try to draw a common line for European citizens, just to hear one another how to unravel Europe.

Progressive Europe, Europe of the future, must be able to invent certain new tools in order to ensure to all Europeans the future they actually want to choose. This thing can only occur through the invention of new political processes adjusted to its own size; new forms of voting campaigns; new citizen representatives of post-Erasmus European generations, and so on.

The EU Europeans, if they truly want to survive, must reinvent themselves and emerge from the shackles of an agonising world, which these European political parties belong to. Whether we like it or not, the French march was the first example, with its reversing of all the ideas taken from the last century*.

Ever since the launching of the IDE party in 1987 and up to the Newropeans campaign in 2009, Franck Biancheri has always defended the emergence of trans-European political parties as tools for Europe’s democratisation, as political tools to teach us how to best make use of the European space, decide and control our future, but also as a bulwark to all rising populism and extremism. Let’s face this challenge together!

Let’s dare to meet this 21st century of democracy. Let’s dare to have the transnational and not the multinational European political lists (this will change all perspectives). Let’s dare to start a real transnational citizen debate by going beyond the national level, by calling on our politicians to assume a genuine community dimension and launch themselves on the European stage**… Let’s give new impetus to politics in Europe. Take the #CitizensRoute73! Occupy 2019!

** the#CitizensRoute73 suggests the creation of a European mobile platform, on the horizon of the European elections of 2019; a European marathon for politicians, men and women, who have decided to embark on the creation of transeuropean political parties. The first step will be set in Toulouse within the Erasmus Students Festival, October 13-15, where 10,000 students are expected to come!