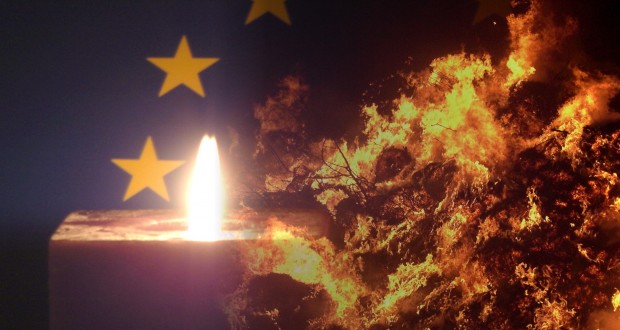 How Europe in 2009: could end up in the hands of the post modern great grand sons of Hitler, Franco, Mussolini and Petain. Franck Biancheri, 1998

The scenario elaborated by Franck Biancheri in 1998 in his article “Europe in 2009 could end up in the hands of the post modern great grand sons of Hitler, Franco, Mussolini and Petain” is being realized in front of us. Franck Biancheri determined that the changeover would be when the “antidemocratic and xenophobic parties will reach scores between 20 and 30% in a minimum of 7 Member-States.” Today the populist, nationalist, separatists, anti-democratic, xenophobic forces have invaded the political space in Europe. The vote of Brexit is a very strong signal to all these populist/nationalist parties: they can win elections on European issues by confining a purely national poll, and influence the European policy agenda in their direction (as an example the current chaos of post-Brexit). We should remember this scenario we republish below.

Europe in 2009: could end up in the hands of the post modern great grand sons of Hitler, Franco, Mussolini and Petain

(a scenario elaborated by Franck Biancheri, for Europe 2020, in November 1998)

“Forecasting is a difficult art, especially when it comes to the future” (Pierre DAC)

The prospective analyses for the 1998-2020 period conducted in the framework of Project Europe 2020 reveals that the 2006-2010 era will constitute a new historical “node” for the EU, just as it is the case with the running 1998-2020 era. 2009 was chosen as key year due to the European election and Commission renewal planned for this date. Related to the path the EU will have taken by that time, a number of totally diverging scenario will be elaborated for the period leading to 2020.

Indeed the period around 2009 will concentrate a series of decisions and realizations that are precisely being initiated today:

Many tendencies affecting the EU were born in the late 80’s, at the time of the European project renaissance. By 2009, these tendencies will have affected two complete generations thus exerting a decisive influence.

The following scenario is based on 3 hypotheses, a historical reminder and an external variable detailed down below:

Scenario: How Europe in 2009 could end up in the hands of the post modern great grand sons of Hitler, Franco, Mussolini and Petain

– Thus they constitute the most important parliamentary group at the European Parliament. Via their national bases they exert a decisive influence on the political agendas of the Member-States.

– Their theories are amplified in the European Council in which half of the States have to take into consideration one third of their electorate which share these opinions. These attitudes are reinforced by the serious economic, political and social turbulence which affect the economic, social and cultural fabric of the EU since the EURO was introduced.

– The absence of radical reforms of the political and administrative system, in particular of its administrative machinery (Commission + Central Bank + Major National Ministries), has increased the bureaucratization of the EU which decisions remain in the hands of a few dozens of thousand people. The system is locked on itself and confronted to increasing difficulties in order to maintain the continuity of the European project facing a conjunction of oppositions of various natures. Without the implementation of drastic reforms, the system was never able to restore its public credibility since the repeated scandals that damaged its reputation at the end of the 90’s – beginning of 2000.

– Antidemocratic and xenophobic forces offer their support to the European construction under a certain number of conditions: a closed-up Europe, defined according to religious and racial criteria, developing relations with its neighbours (Eastern Europe, Mediterranean) founded on power and exploitation of the weakest, and asserting its ability to bring back an order based on the existing administrative machinery.

– The European administrative machinery, thus following a typical progress in Europe’s history, chooses to preserve at any cost the European project while protecting its privileges and influence.

– Therefore it decides to head towards a strategy of partnership with those antidemocratic and xenophobic forces (sure as it is to be able to get rid of this circumstantially).

– July 2009 : The post-modern great grand sons (white-collar, mobile phone, Internet…) of Hitler, Mussolini, Franco and Pétain take control of the EU with the complicity of a European administrative machinery turned into a bureaucracy.

Europe 2020 has been presenting this scenario to 100 European representatives (members of Commissioners’ Cabinet, of the European Court of Auditors, Ministers’ counsellors, Brussels lobbyists, public opinion poll specialists, intellectuals…). 90% of whom declared that they had never envisaged such scenario; however they recognised that in case the European administrative and political system remains unchanged until 2009, this scenario represented a high probability of risk.

– Hypothesis Nr 1 : In 2009, antidemocratic and xenophobic parties will reach scores between 20 and 30% in a minimum of 7 Member-States

The emergence of antidemocratic and xenophobic parties is a heavy tendency (notably initiated in France during the 1984 European elections). For the last 15 years, the rising of these extreme tendencies can be correlated to the progress of European integration. Those parties significantly utilize the European elections-weakest component of democracy in Europe – in order to reinforce their political influence. Aging populations and recurrent migration issues naturally feed theories in favor of security and withdrawing.

– Hypothesis Nr 2: The European administrative and political system does not change radically

The European administrative/political machinery, as well as the club of these 10,000 (maximum) people who make the EU today, remains stable. They face the new post-Euro era without having implemented any profound reform by 2002. It is not only a matter of political reforms (voting system, number of Commissioners, qualified majorities…), which can wait a bit as the enlargement has been postponed; it is a matter of radical reforms of the European administrative machinery. The present failures of the system (opacity, fraud, wasting, corruption, various privileges…) are maintained. Complexity increases (Commission, national Ministers, regions, various agencies…) due to a lack of reflection over the reasons and means. Faced to the post-Euro turbulence, as well as to the increasing criticisms, the system hardens in the hope that the difficult period will soon be over, each institution preferring the status-quo to a general re-questioning. In order to maintain the European construction at any cost, the machinery turns into a bureaucracy (opacity, drifting of the recruitment procedures, reinforcement of top-down processes….);

A Historical reminder: Antidemocratic and xenophobic forces of Europe have always been attracted by the European unity dream, mystic of the imperial Rome

Contrary to what appearances make us believe, antidemocratic and xenophobic parties are not necessarily anti-European, they can even be very pro-European. Indeed from the Inquisition to Hitler through Napoleon and Staline, the forces that have tried to unify Europe never put democracy at the heart of their values; it would rather be the contrary. Therefore it is legitimate to notice that :

. on the one hand, in History the dream of European unity has usually walked together with values that are at the opposite of those founding the European Union;

. on the other hand, antidemocratic and xenophobic movements, often also demagogic and opportunist, can easily gather around the defense and promotion of a united Europe : a racial, religious, locked up and antidemocratic Europe (at the opposite of that of the signatories of the Treaty of Rome).

An external variable: The evolution of transcontinental relations

In this scenario, this variable will be considered neutral. In reality, it can increase or diminish strongly the risks of major crisis for the EU by 2009. If relations between the emerging continental organizations (EU, ALENA, MERCOSUR, ASEAN, CIS, Arab World…) tend to harden as a result of the economic crisis or cultural tensions, then this scenario will see its probability increase. On the contrary, the setting up of a new planetary organization based on continental blocks engaged in vast collaborations, then its probability to happen would significantly decrease.

Download: Europe in 2009 could end up in the hands of the post modern great grand sons of Hitler, Franco, Mussolini and Petain – Franck Biancheri, November 1998 (with a forword dated 1/12/2005)

Previous: Talking about Erasmus on France Culture, inevitably reminds Franck Biancheri. Listen to “Europe: building in suspension” (17/02/2016)
Next: LEAP president invited to head the jury of a pre-Y20 event in Shanghai (Euro-BRICS )