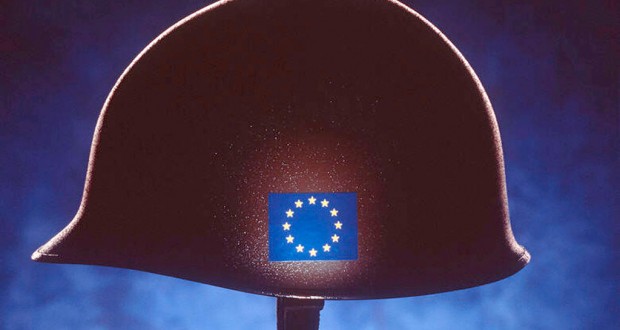 Posted by: Sophie Berger in Tribune 08:15 AM

– No European army without European Democracy –

Lets start with some fundamental thoughts and then go into European politics.

An army is a democratic anachronism for two reasons:
. can a state based upon democratic values send its sons and nowadays even its daughters, out to die, or to kill, or to be wounded and to be traumatized? This question, if posed in this simple and direct way, has to be answered with a clear no, because our European values are based upon the reverence for life;

. and secondly: an army, which is a structure for war, can never be democratic. If in combat, you cannot vote or negotiate what to do, you need clear and strong leadership, not democracy.

Nevertheless, nearly all states do have armies and their sovereignty is to a large extend based upon their military. This is an interesting example of how far away we still are from realizing our basic values. And so we come to the realm of politics, which is dealing with the strategies how to manage the current stately structures, which have been imposed upon us by history.

Our current world is becoming more and more insecure and this more and more through the actions of non-stately operators. Europe is surrounded by battlefields and wars, be it in Ukraine, in Syria or in Libya and the ISIS-terror has reached its heart.

Our European neighbor Russia, hit by islamistic terrorism since a long time, fighting ISIS in Syria and defending its sphere of influence in Ukraine, is building up its military, modernizing its nuclear weapons.
Donald Trump, who might be the next American president, puts NATO into question (in favor of an organization, that is able to confront the current challenges like non-stately operators and cyber warfare) and wants states like Germany to pay for their protection. He also plans to massively build up the American military.
His opponent Hillary Clinton, former secretary of state, has proved to be a proponent of the American politics that was a major factor in making the middle east into this major threat to European security, that it is now.
Great Britain, that for a long time has opposed the idea of a European army has voted to leave the EU.

In this situation we hear now in Brussels and European capitals and on European summits talk about a European army, a Europe of defense[1].

But is this feasible? Or what are the necessary conditions?

Critics say, that this road is taken, because the leaders cannot find a common road to solve the problems of the Euro and towards more economic integration. There is some truth in this argument, although it does not acknowledge, that a common European defense is currently a political necessity.

But it is necessary to draw conclusions from the ill-conceived monetary union. Nearly all economists and even many politicians agree, that a common currency in order to work and make Europe prosper needs a full-blown political integration. And democracy, as we all know, is the tool for political integration. Its a tool for bringing forward all the aspects and problems of a certain political field and its a tool to generate political legitimacy. For Europe this would mean, as Franck Biancheri and his friends have not stop demanding, real transeuropean elections for a parliament with strong powers (like the right to vote upon a budget) and a European government elected by this parliament. But the last generations of political leaders have blocked this, ultimately because they, coming from the political scenes of the European nation-states, did not want to put themselves into question.

Now we want an European army without a European parliament that has the rights to control it and without a democratically legitimated leadership that can lead it. The European people will feel such an army to be one more threat and not a tool against the current threats and it will not work.

But because we want to avoid this disaster and because we are currently in a very challenging situation, there is no way out, but to start building this really democratic European governance to give the European citizens the power to decide upon the direction of a European army and give legitimacy to it.

[2]     There is even one positive example for military integration: Germany, after the fall of the wall, has not dismissed the members of the east German army, but integrated them, including all its officers into the west-German army (whereas in Iraq the dismissed army has become a major basis for ISIS. Germany has also after the war managed to rebuild an army based on the concept of  “citizen in uniform” (and also using and integrating personnel from the former army) and its army still is today a parliamentary army, meaning all its deployments have to be oked by the parliament (except for emergency).

[3]     And if many say, that real European democracy is not feasible in a short period of time, why not think about creating now at least a democratic European military governance? Why not elect on a transeuropean scale a military parliament (which maybe even should not be big in size), which then elects the European minister of defense?  (See also the book of the philosopher Johannes Heinrichs: “Die Logik des europäischen Traums, Eine systemtheoretische Vision” and his article: Four-way path of democracy