Don´t miss
Home / FB Doc Selection / The first half of the decade marked primarily by world geopolitical dislocation: 2010-2020 – The Sino-American relations will determine the pace and the magnitude of the shocks (Franck Biancheri, 2011) 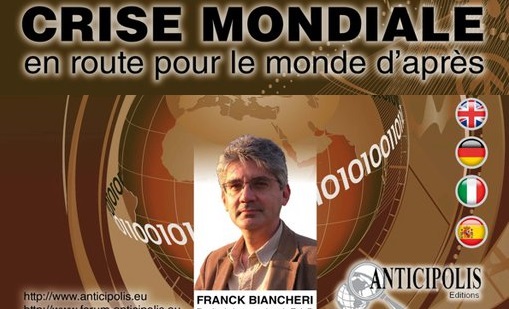 The first half of the decade marked primarily by world geopolitical dislocation: 2010-2020 – The Sino-American relations will determine the pace and the magnitude of the shocks (Franck Biancheri, 2011)

In 2010, Franck Biancheri, in his book “World crisis – The Path to the World Afterwards” published by Anticipolis, wrote that the likely developments of the decade 2010/20120 will be a chain of events that will lead to the disintegration of the current international system. After reading the excerpt below, in which he posed the Sino-US relations as determinants of the pace and magnitude of the shocks that we are going to experience, and of which we have a foretaste since the election of Donald Trump to the US presidency, we can only encourage you to immerse yourself in this book that will give you a concrete vision of the future of Europe and the world by 2020, tragic twilight of the world before, painful dawn of the world after … World crisis – The Path to the World Afterwards (Anticipolis editions)

It will be Sino-American relations that will determine the pace and the magnitude of the shocks that we will experience between now and the middle of the 2010-2020 period.

(Excerpt book “World crisis – The Path to the World Afterwards” by Franck Biancheri, 2010)

The crisis, because it wasn’t anticipated by world leaders, is advancing at its own speed. In 2009 the financial efforts, without historical precedent, of the United States, Europe, China, Japan and other countries have allowed only two things to happen: to anesthetize the general population in various countries in order to postpone a violent political and social reaction and to save the major financial institutions without reforming them. All that done at the cost of an intolerable State debt burden, the conversion of a very large part (around 30%) of the world economy into a “zombie economy” (that’s to say surviving only through direct or indirect state aid or even via the manipulation of accounting rules) and a growing distrust of Western public opinion vis-à-vis all the ruling classes rightly suspected of being no more than the representatives of the most powerful financial interests. Alongside these very visible events, and ultimately in the short or medium term, the crisis represents other secular trends profoundly changing the world order we know, in particular China and India’s return to power and the end of a Western centric world.

The decade now dawning will be the setting for the interaction between these two “stages” of the crisis which, whilst being correlated of course, are not identical. The secular trends can be seen, over a decade, as data, that’s to say as events for which one can prepare without really being able to affect their progress while other events (lasting between two to five years on average) may on the contrary be directly affected by our decisions (those of the leaders and/or the people).

The first part of this decade will be essentially marked, first, by the growing emergence of secular trends marking the end of Western-centrism and, secondly, by the consequences of the financial crisis and especially the reactions to it in 2009. Reactions that led to excessive state debt and, in particular, excessive debt of the mainstay of the world order in recent decades, the United States. China being the preferred vehicle for these secular trends in action and the United States being, at the same time, the country at the heart of the financial crisis and its consequences (1), we can say that it will be Sino-American relations that will determine the pace and the magnitude of the shocks that we will experience between now and the middle of the 2010-2020 period.

Similarly, the other players (new, former or reinvented (2) powers) will of course act and react in the coming years, either according to the development of the USA China relationship and its consequences, or according to their own expectations for the world in the decades to come. It is most likely that this group that can give birth to the most fruitful initiatives and ideas to prevent the second part of the decade turning into a descent into hell for most of the planet and allow, between now and 2020, a lasting new world order to start to take shape. Given what has happened since the recognized beginning of the crisis, the USA-China duo has in fact very little chance of avoiding a sterile confrontation.

Neither the Chinese leadership, nor the U.S. elite seem to be able to do anything but defend/promote their own vested interests. Their mutual conflict and its domestic consequences for both countries will also demand all their attention, leaving them little room to think about the future of the world. That said, there is no guarantee, of course, that the contributions of the other layers will be able to divert the world from the logic of a zero sum game and, therefore, conflicts between blocs such as those which will quickly establish themselves in the relationship between the USA and China. It is, moreover, for this reason that there are two accounts of the future in this book. The main difference between the two hinges on this factor: the divergence of assumed developments becoming more and more apparent during the second half of the decade.

But let’s not anticipate (for once) the end of the book. Let’s first look at the likely developments for the main geopolitical players for the 2010-2020 decade, as well as the general framework oftheir interplay, in more detail.

These likely developments will be a chain of events that will lead to the disintegration of the current international system, particularly through the collapse or paralysis of the major international institutions and the strategic links of the global monetary and financial system, and the beginning of a process of structural rebuilding of the major global players like the United States, the EU, Russia, Asia and Latin America, fluctuating between the beginning of disruption for some and the continuation of reorganization for others.

Buy the  book: “World crisis – The Path to the World Afterwards” (2010) Anticipolis Publishing

(1) This may seem surprising but I don’t think that the United States would be a central player in the currently emerging secular trends. In the end they will only have been, at a global level, a substitute for European power for the time that it took the latter to complete it’s painful metamorphosis from “European powers” to “the European power” during the twentieth century. It really is Europeans, as the EU, who make up one of the new potential powers of the twenty-first century, alongside China, India and Russia, not least because it was an entity that didn’t exist in the world order until the 1990s. It took the fall of the Berlin Wall for the European community project to leave its experimental cocoon. We will come back to this later in the book.

(2) We can put Russia, China, India … and the EU in this latter category. In another guise, these powers were already major historical players. While Brazil or South Africa, for example, are actually new players. Today the United States is undeniably a former power.

Previous: A Tribute to Franck Biancheri (Geta Grama-Moldovan)
Next: A short update on the Dutch election (Veronique Swinkels)