The moon, the space, technologies, innovation have always fascinated Franck Biancheri. In 1986 he organised the first European space weekend. He was convinced that this kind of techological challenges are the one to bring together the Europeans. Through the realisation of a concrete project such as the conquest of the space in which European citizens are able to project themselves, to succeed in the realisation of a project that is vastly more ideological: the European integration. This is the guiding principle of pedagogy which for him was primary. Bringing Europeans to the moon is also bringing them to Europe. 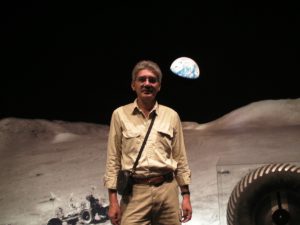 Year 2003, with recent tragedy of US space shuttle Columbia and with the imminent launch of a manned spacecraft by China, is definitely closing an era of space conquest and opening a completely new one.

The era of USA/Russia domination of space conquest is coming to a close; the coming one is an era of multiple space powers without clear leadership anymore in terms of space conquest. In order to play an active role in that ‘New Space Order’, Europe has to rapidly define its strategy and to back it with relevant means. Otherwise, Europe will be left out of what will be, in any case, the new frontier for mankind by the end of this century.

Russia’s space programme is today unable to address new challenges of its own. Crippled by lack of funds and no Russian political vision for its space assets, the Russian space programme is indeed delivering robust tools and components, but no leadership and endeavour as during the time of the USSR.

Today, it is now obvious that the US space programme is also in total jeopardy. Underfunded, based upon obsolete technologies and components, lacking also any US political vision for space conquest, it is today only the shadow of what it was in its leadership era of the 60s and 70s.

Meanwhile, in the past two decades, new space powers have emerged, mainly Europe and China (with smaller contenders such as India or Japan). China’s programme is obviously sponsored by a strong political will to use space conquest for reaching two main objectives:

– Establishing China as one of the very few space powers, commanding therefore entire segments of tomorrow’s technology and might

– Establishing Chinese as the people really serious about ‘going for the other planets’.

And as everywhere (but in Europe), China also uses its space programme to boost national identity and pride, projecting its own image into the future of humanity.

Europe is in need for a space strategy

Europe is the other emerging space power of the past decades. It has successfully taken over a major part of non military satellite launches and has therefore become the current leader of the commercial use of space. It now faces difficulties which only occur to leaders: new technology development troubles (Ariane V repeated failures) … and the need for a decent long term strategy. Technology difficulties can only be overcome by better management and funding. Both can only exist if there is a clear political vision and will for a European Space Programme, heading towards 2050.

Such a long term programme will bring several major benefits to Europe:

– Keeping up with a future-oriented image (as shown with the major impact in public opinion of successes like Ariane or Airbus), especially with younger generations

– Generating a ‘European feeling’ of common identity and pride of actively taking part in a major human achievement: space conquest.

Of course such a European Space Programme will have to obey several constraints in order to be successful (that is, generating the above mentioned benefits). First, it must define strategic objectives able to give Europeans a specific major aim, as well as being actively involved in other nations major projects.

Simply said: Europe will have to be a leader in one of tomorrow’s key global space projects; as well as taking part as a partner in other major projects. Meanwhile, it must be funded and managed properly. Funds will be available from 2006 on as the Common Agricultural Policy decreases. Obviously it is out of the question to reduce the already meagre EU budget; therefore funds not allocated to the CAP will be available for other purposes: the European Space Programme should benefit from these funds.

In terms of organization, the solution found for Galileo, a joint venture of both European Space Agency and the EU, may offer a proper framework, a crossroads of intergovernmental and common policies.

Setting up a permanent European base on the Moon

The objective of being an active partner of all major international space programmes is already in place and must be pursued (International Space Station, Mars, …). However, it still has to be decided which project Europe should make its own.

Fifteen years ago, when still a student, as president of AEGEE-EUROPE, I had several opportunities to discuss space policies issues, at the occasion of various ‘Space Week-Ends’ we organized in Toulouse and Munich with specialised students and with top European decision makers in aerospace. At that time one idea was cast that Europe should focus on setting up a permanent base on the Moon (which was forgotten when the USA and USSR were not politically interested any more by the race to the Moon).

Whether it is in terms of science, seriously testing ‘industry in space’, finding new solutions to get rid of very dangerous pollutants, or even setting up a more adequate base for future exploration of other planets, the interest of such a ‘Europeans on the Moon’ space programme are numerous and concrete. This is only a possibility. But in any case, people only get interested by space odyssey if THEY (and not robots) are part of the game.

Of course this requires sending Europeans to space and to refocus the existing policy on manned spaceships. The recent accident of Columbia, and the fact that the International Space Station is currently unreachable for an undetermined period of time illustrates how important it is for Europeans to be self-dependent regarding access to space. Unmanned space conquest of course has also its role and ‘niche’; but as far as we know, as Europeans, we did not explore the world by sending ‘drones’.

No risk of genocide

In a few years time, with EU enlargement and its own Constitution, the European Union will be the youngest of all political entities on Earth. Being audacious and confronting the risks is part of being young. Trying by any means to avoid the unknown is on the contrary part of being old. If we bring Europeans to space, we will bring younger generations closer to feeling part of a common dream: a peaceful one, to be shared with the rest of mankind. And this time, we are sure at least that there are no inhabitants on the Moon, so we do not risk committing genocide as we did in our past colonization adventures.

FRANCK BIANCHERI – Director for Strategy and Studies of Europe 2020, a trans-European think-tank based in Paris. He is currently starting a democratic premiere: the “Newropeans Democratic Marathon”, by touring, until June 2003, 100 cities in 25 European countries, in order to debate the future of Europe directly with the citizens.

Previous: The European project is not a dream, but a hope. It is rooted in rationality, which is not the case with dreams. (Franck Biancheri)
Next: Joint declaration AEGEE-Europe, AAFB, LEAP2040 – From European Elections 2019 to Europe 2040: Making sure Europe’s nascent democracy serves the interests of the next generations