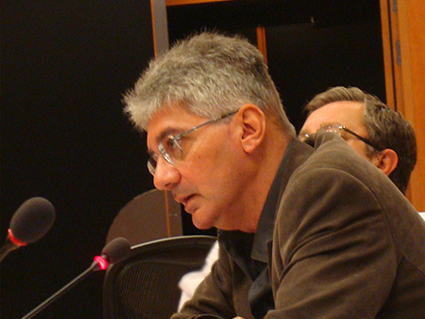 This article is the 3rd in a series published by Franck Biancheri in 2004 Small political comments of a Euro-Citizen. We republished it today because it demonstrates once again the perspicacity and simplicity Franck Biancheri used to describe the dysfunctions of the European political system and their inherent dangers.

Today if not the Schulz parenthesis, the “appointment” of the new President of the European Parliament, Antonio Tajani, a member of the EPP group, who is also a friend of much contested Silvio Berlusconi, perpetuates the method of “systematic bleeding” of the key positions of European Parliament by the EPP and the PES, signes the freeze of any kind democratization process of an institution devoted to be democratic. Despairing…

“Meanwhile our little “friends” – populists, extremists, xenophobes – progress, against a backdrop of growing European abstentionism; and lobbyists swim like fish in water …” – as Franck Biancheri has written.

Small political comments of a Euro-Citizen -3

Barely 6 weeks after the European elections, the spectacle of the political system community has become more pathetic. Again, a combined election between the EPP and the PES to share the influence and the financial means attributed to the groups dominating the Strasbourg assembly: without any common political objectives, nor any joint legislative programs. How could the voter give political credit to a Parliament where the two so-called “parties” (left and right) share duties in complete privacy when just six weeks ago they have heard them explain how much their visions of Europe were irreconcilable? Maintaining this method of “systematic bleeding” of the key positions of European Parliament by the EPP and the PES will undoubtedly increase abstentions from the next European election; and also the voters of populist factions.

In this regard, the “puppets” of the UKIP disclose their intentions. Behind the gross and brutal provocation (yesterday, on women, tomorrow, I imagine, on immigrants, the poor, the disabled, the intellectuals, and all those who do not resemble an average “diehard”), they no longer speak of the “breaking” of the European Parliament, but on the contrary begin to find their feets. We will see over the next years, through their votes in particular, who this type of party are working for. Let us beware, they are undoubtedly a “prototype” for an operation of the largest scale in the 2009 European elections. And it is not these political fictions that the EPP and the PES can oppose. On the contrary, they generate this type of populism through their ineffective politics.

Moreover, the EPP and PES do not even have political leaders with a European dimension. Their group leaders, or their candidates for key positions, come and go from one legislature to another, and even during the legislature, according to obscure arrangements, agreements between apparatus, incomprehensible to the uninitiated. In fact, they are managed like the Commission or the Council: opacity, bureaucratic management, refusal of “personalization”, conviction that the public does not need to know what is done in its “interest”, …. Moreover, the fact that a growing number of European civil servants to be elected to the European Parliament, including through these two parties, must further reinforce this trend. So only a few names like Cohn-Bendit or Jens Peter Bonde are able to survive as identifiable political individuals. The rest is as “gray” in the eyes of the public as any administration is.

Meanwhile our little “friends” – populists, extremists, xenophobes – progress, against a backdrop of growing European abstentionism; and lobbyists swim like fish in water … but we do not need to worry, the EPP and the PES (of which 80% of Europeans ignore the existence) have just found work for two Europeans who will succeed for the next five years at the head of the European Parliament. It’s beautiful like twilight politics!

And do not tell me that we cannot do otherwise. Everything is ready to create a Trans-European Democracy: issues, public opinions, technology, methods are there. They now visibly lack the women and men to build it. Courage, they arrive!