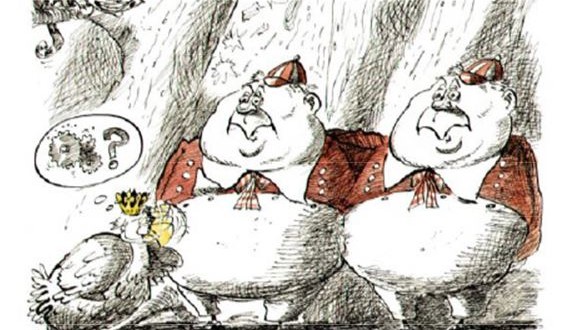 Archaism, for the managerial elites, is to become convinced that managing a country is just like managing a company…

To make understanding any main event that rhythms the geopolitical evolution of the world we like to remember the very fine analyzes of Franck Biancheri. Those on the political archaism, which was addressed to Europe and the Europeans, and more particularly to French citizens (the text was drafted a few days before the 2nd round of the French presidential election, with the election of Nicolas Sarkozy), also illustrate the inauguration of Donald Trump yesterday January 20th, 2016, 45th president of the United States:

Archaism, for a leader, is to mix up the past and the future, to believe that yesterday’s dreams are today’s and tomorrow’s truths, to refer to concepts and values already sinking into History, to submit to already extinct strengths, to turn the pursuit of one’s teenager dreams into a wide ranging collective quest, and to believe that one’s limited imagination can reflect the aspirations of an entire complex society.

In Europe we are not immune to these dangers. A text to meditate which circles the dangers of the archaism of all the actors of our society.

Reemergence of political archaism in Europe: Towards a French test

We Europeans have been, in the XXth century, from East to West of our continent, the actors of dreadful historical tragedies perpetrated in the name of modernity while in fact they were the contemporary expression of the most ancestral archaism.

Hitler, Stalin, Franco, Pétain, Mussolini, and a few others were their figureheads, who drove their divided populations, fervent or fearful, into the adventure programmed by their madness.

Today, the same archaism is reappearing everywhere in Europe, and France makes no exception. As Europe 2020 wrote in 1998 in its now famous scenario entitled « UE 2009 : when the grand-sons of Hitler, Franco, Pétain, Mussolini et Staline take control of Europe », the further away we are from 1945, the more perks up again the archaism that prevailed in the previous period. Let’s not be mistaken: when times are ripe, the appearance of the most dangerous archaism is always that of the most contemporary modernity. Therefore don’t seek for men in uniforms fond of military parades (they will come later), but watch out for managerial stances, roaring with efficiency and values, where “science” legitimates moral convictions, plenty of stories meant to frighten the “honest citizen”, and filled with intentions to protect everybody against every danger.

These « archaics »-in-modern-gear are not always easy to smoke out as they are products of times when these themes are all over the place. But who opens his eyes can spot them easily as they are always heading to the same direction: dividing, constraining, preventing, frightening,… Now let’s find out under which forms is currently hiding this reemerging European archaism.

Archaism, is when the leader figure, his will, his madness overshadows the spirit, capacity to think, perspicacity of the citizen who lights off his worries and persuades himself that the “chief” will only implement what’s “good” and will give up what’s “bad” from his declared programme, and that “all those negative features are just meant to seduce all the “dummies” whom the “chief” needs in order to conqueer power”. That’s what the “sensible” citizen believes, stormed as he is by his emotions and his quest of a leader, convinced as he is that the illiterate, the blind, the dummy, the one manipulated… is necessarily the Other…

Archaism, for a leader, is to mix up the past and the future, to believe that yesterday’s dreams are today’s and tomorrow’s truths, to refer to concepts and values already sinking into History, to submit to already extinct strengths, to turn the pursuit of one’s teenager dreams into a wide ranging collective quest, and to believe that one’s limited imagination can reflect the aspirations of an entire complex society.

Archaism, for a citizen, is to forget analysing speeches, to let one’s reptilian brain take over one’s cortex, to refuse to see the incoherences, to agree that black is white, to give up seeking for causes and consequences, to believe in miracles without wondering about faith, to think that since the leader needs always more power in order to succeed he should no longer be accounted for his deeds.

Archaim, for a social body, is when its intellectual and political elites abdicate from their role of “enlighteners” of a collectivity and turn it into a quest for the preservation of their own priviliedges, even if this requires that they make their population disregard all the signs that should otherwise lead them to choose another direction. It is when the “little chief”, the “caporal” figure replaces that of the “teacher”, a “little chief” who sees everything in terms of power struggle, living in a bi-dimensional world, with a “bottom” and a “top”, no horizon, no transversality whatsoever in his vision of life or society: he gives orders to his “inferiors” and takes his orders from his “superiors”; he has no equals, just competitors; in fact he is always “under pressure” and projects his anguish on the firmness of his officering or on the brutality of implementation of his action.

Archaism, for the managerial elites, is to become convinced that managing a country is just like managing a company. It is to ignore the multidimensional aspect of any contemporary society, prefering to sum it up to unidimensional logics of profit growth. By means of this excessive simplification, these managerial elites imagine the “worse” having in mind a large company going bankrupt, when in fact History does not even recall this type of event. One thousand large companies going bankrupt is more like “worse” in politics”: the division of a country, its political and social fabric being torn into pieces, that’s what History feeds from, that’s what results in casualties by thousands or by millions, and that’s what requires decades to fix (when it is fixable). A « manager » has as much understanding of History as a lieutenant on a battlefield. Due to this incapacity to apprehend the complexity of a country and of its management, modern managerial elites can become fascinated by a political archaism who too lives in a unidimensional world (except that in his case, it indicates a severe pathology).

Archaism, for journalists, is to believe the contrary of what they write. In private to see, to know, and in public not to tell. It is to think of oneself as Beaumarchais being already a scribbler for the Pravda.

In the end, archaism, for a power, is to boast about creating a new world, made of new men “washed” from a past that must be abolished due to the fact that it is no longer in conformity with the current power. It is to envisage the future as dislocated from the past, when in fact History is the past plus the present plus the future: History is an addition not a subtraction.

To conclude these considerations on political archaism today in Europe and in France, here are two last remarks for the intention of all those Europeans who will make decisive votes in the coming years:

. according to the deepdown conviction of political “archaics”, principles are only meant for “dummies”; therefore, the more principles you find in their speeches, the more they will be ignored in practice.

. like Humpty-Dumpty in Alice in Wonderland, the political “archaic” makes words say what he wants: the victim is the leader, the danger is the weak, simplification is complexity, homogeneity is diversity, the truth is the lie, the future is the past. Except that it is not on the other side of the mirror. It is in Europe yesterday, today and tomorrow. 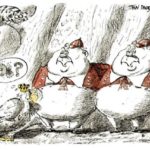 Image: “Poland has two egomaniacs. Aren’t we lucky? Will France have one? Alice’s adventures are a bit more relevant though than Napoleon’s exploits». By Jan Darasz