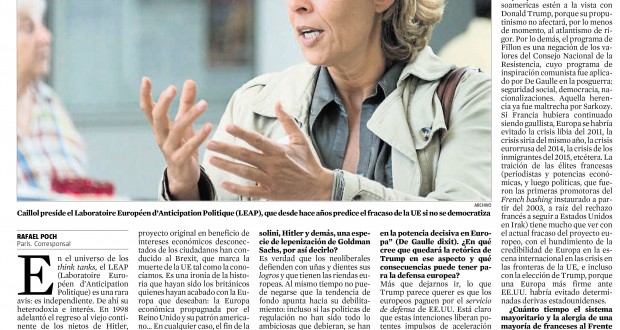 Among all the think tanks in the world, LEAP (Laboratoire Européen d’Anticipation Politique) is truly a rare bird: it is independent. Hence its heterodoxy and its interest. In 1998, this think tank predicted the return of the “grandchildren of Hitler, Franco, Mussolini and Petain” in Europe; in 2006 it predicted the crisis of the subprimes; it has also anticipated the collapse of the European Union in case its democratisation does not happen. Founded in 1997 by Franck Biancheri, a European political scientist (1961-2012), LEAP is headquartered in Paris, having Marie-Hélène Caillol as president.

The Association of Friends of Franck Biancheri is proud to share with you the interview of Marie-Hélène Caillol (President of LEAP and of the AAFB), conducted by Rafael Poch, correspondent in Paris for LA VANGUARDIA.

You can also read the interview in Spanish here