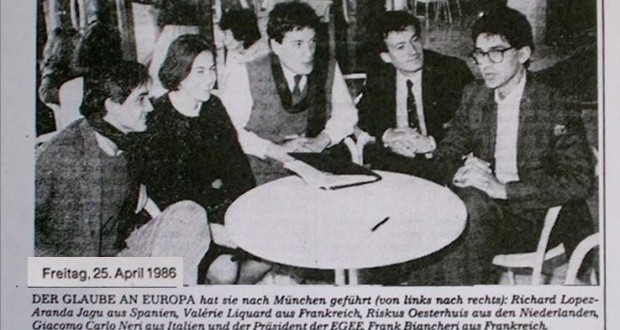 Posted by: Marianne Ranke-Cormier in Quote of the month 04:08 PM

On July 1st and 2nd, the Franck Biancheri Network in partnership with iCAN, the city of Ottignies-Louvain-la-Neuve and numerous partners organised the kick off event for the #CitizensRoute73 – Horizon 2019 European Election. Following Franck Biancheri’s 30 years battle for the democratisation of Europe political path, European citizens, actors of changes, have been invited to gather together on this Route to carry out the public trans-European debate through the invention of new methodologies, the definition of innovative tools and strategies.

Franck Biancheri has often repeated, and last in front of the AEGEE-Europe Agora in Enschede in May 2012: “There is nothing like one European. The European is a team of Europeans… the only way we can imagine a European, it is a team of people from different countries, not a single man or woman.”

And this also the only way to work on #CitizensRoute73

Previous: National Identities and European Solidarity – by Eveline Caduc
Next: Washington and Brussels are from the Moon… though of course they do not come from the same side! – by Franck Biancheri (2003)