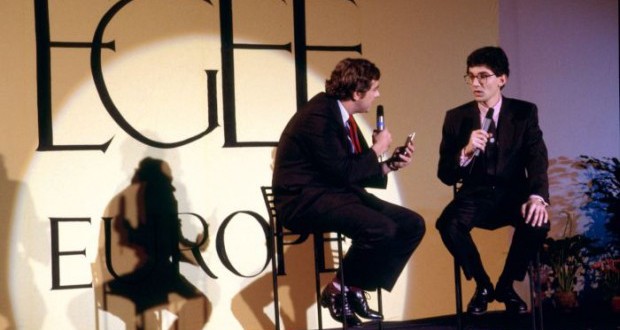 A Franck Biancheri Year… every year

Last year, AAFB and AEGEE-Europe launched a sustainable project aimed at paying tribute to and acknowledging what we owe Franck with a view to help us build on this grand heritage of ours. Thus we launch the Franck Biancheri Year in partnership with AAFB (Association des Amis de Franck Biancheri), an association created in the aftermath of his death aimed at gathering, synthesizing and publicizing his work.

The Franck Biancheri Year 2014 label was awarded to AEGEE-Delft

Today, as part of the celebration of AEGEE-Europe’s 30th anniversary, AAFB and AEGEE launch a special FBY Open-Call with a view to revive one of the most important and successful events in AEGEE’s History: The Night of the Seven Antennae 1986 (you are invited to discover this event by clicking on the link). In this magical event, for the first time EGEE broadcasted, together with the newspaper LE MONDE, political debates about the future of Europe between students and high level politicians simultaneously-held in seven different cities connected via Satellite.

Today, with the help of Internet and new technologies, we want ot revive the idea and host seven simultaneous events blending interviews, music performances and high profile guests from politics into a « Night of the Seven Antennae – Reloaded » event, coordinated and managed by AEGEE-Europe and the Anniversary Team.

And this is of concern to YOU !

AEGEE-Europe antennas are indeed kindly invited to present their proposals for this « Franck Biancheri Year – Special 30 » edition. The seven best projects will be awarded the FBY2015 label and receive 2,000 euros each in order to contribute to invent a new historical event : the « Night of the Seven Antennae – Reloaded ».

Here is the Open Call for Locals by AEGEE-Europe:

AEGEE is turning 30 soon, on April 2015, and we plan to celebrate this anniversary and look forward to the many more AEGEE decades to come! We want these celebrations to be a shared and inclusive experience for the whole network and this is why we are issuing this open call!

Therefore, in order to celebrate such big achievements, AEGEE-Europe is launching for the second year, together with the Association Amis de Franck Biancheri, the Franck Biancheri Year project. We will together commemorate the founder of AEGEE-Europe, who strongly believed that citizens were key in the success of the European construction and that a European democracy was not just a moral aim, but a prerequisite of sustainability of European construction altogether.

We are looking for seven antennae that are willing to host seven separate three day events in the middle of March (13/03/2015-15/03/2015) similar to the night of the 7 cities that took place in 1986! (https://www.youtube.com/watch?v=uFsGEw6wcx8) (In 1986 EGEE organizes, together with the newspaper LE MONDE, the Night of the 7 European cities, broadcasting political debates about the future of Europe between students and high level politicians from seven different cities.*)

All participating antennae in these simultaneous events will work closely with AEGEE-Europe and the AnniTeam and receive guidance and support from the Content Managers of the Anniversary Team.

The events should take the form of an open dialogue/discussion with local politicians and stakeholders regarding the future of Europe and students’ and youth’s involvement in it. The conferences should also be in accordance with the final anniversary conference’s theme ‘Europe in me – me in Europe’.

Europe in me – Me in Europe

We would strongly encourage proposals which include the following :

Of course, your own thoughts and ideas regarding the structure and content of the events will be more than welcome!

Proposals will be examined by a Selection Committee made of members of both AEGEE-Europe and AAFB. Every one of the 7 winning antennae will be granted 2.000 euro for its contribution to the organisation of the event and for highlighting the FBY label all through its programme of the year.

So what we ask from you is to prepare a 2-3 pages proposal with:

All applications should be sent to aegee30anniversary@gmail.com, the deadline to apply is: 16th November 2014 at 23:59 CET.

Here’s the timeline for the overall project:

20/11 : Selection Committee and publication of winning-antennas

06/01 : Update of program draft/budget and transfer of first half of the grant

31/05 : Presentation of project results and transfer of the other half of the grant

If you have any further questions, please do not hesitate to contact us or the

04:00 PM
Marianne Ranke-Cormier
Previous: Test your memory! Identify the person in this pic as well as the exact moment it was taken..
Next: November, 8th 2014 – 4th Friends of Franck (AAFB) meeting in Brussels: Program