Newropeans, the First trans-European political movement … because the EU is too important to be left in the hands of national parties and of bureaucrats… Newropeans, a political movement with a self-decided “limited life-span”, which is also destined to prevent the rise of extremism … Newropeans, an instrument to help the EU expand the frontiers of democracy in terms of size and of diversity, an essential contribution to the world in the XXIst Century … It is no longer possible to separate the fate of single Member States from that of Europe as a whole. To make a success of the European political project, we have to place our citizens and peoples in the driving seat. … That has been the first Newropeans’ Manifesto of 2005 ! 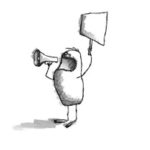 It is no longer possible to separate the fate of single Member States from that of Europe as a whole. To make a success of the European political project, we have to place our citizens and peoples in the driving seat.

• The convergent reactions of Europe’s peoples with regard to the preventive war in Iraq, and the growing mistrust with regard to the European constitutional treaty demonstrate effectively the similar path that destiny is taking in all of Europe. Indeed, European citizens seem to have more confidence in each other than they do in their own leaders. Nevertheless, European political leaders have not managed to modernize the European Union, which today no longer corresponds to the expectations of its citizens, either in terms of participative democracy, or in terms of the results of its policies.

• The European Union’s current political crisis reflects the growing mismatch between citizens’ expectations and the capacity of national elites to meet these expectations. This situation is the result of a very simple historical evolution: Europe was project “under construction” and is now en existing reality, in need of “being governed”. With the massive enlargement of 2004 and the end of the Yugoslav war, the European project achieved a phase of construction that was started 50 years ago, and whose objectives were to ensure peace and prosperity across the continent by establishing democracy in the different European states, and unifying them in a common corpus.

⇒ Henceforth we need to start a phase, which is a new Beginning, where the central challenge of the European project becomes the democratic governance of a political entity of 500 million people, made up of 30 different nationalities, cultures and languages.

“For a new Beginning of the European political project”

This historic transition of the next two decades cannot take place unless Europeans take their common destiny in hand, and together invent this Europe of tomorrow.

The skills, methods, instruments, and actors needed for piloting the European Union of the next decades are totally different to those used in the phase of construction. They are still to be invented, just as they were in the post-war decade by the “founding fathers” of the EU. The level of challenge is the same as that facing Schuman, de Gaspéri, Adenauer et Monnet when they invented new institutions, methods and strategies to avoid the return of a war in Europe.

For Newropeans, in particular for the generations born after the Treaty of Rome, the challenge is to invent a method which allows 500 millions EU citizens to be the principal deciders of the main policy orientations decided on by the European Union, as much in domestic policy matters as in its relations with the rest of the world. We can only achieve this goal by creating a completely “new Beginning” for the EU.

A democratised European Union is not simply the EU as we currently know it with the addition of democracy on top. It is a European Union that is radically transformed in its institutions, its methods of functioning, and its political actors, and all that with the aim of allowing citizens and peoples to be placed in the driving seat of the community system. This is all the more radical given that today they have no role in the system.

Newropeans, the First trans-European political movement … because the EU is too important to be left in the hands of national parties and of bureaucrats

For Newropeans, the first step to allowing the success of the democratisation of the EU is to build a large trans-European political movement.

For the first time in the history of Europe, Newropeans presents the same vision of a collective future in all the countries of the European Union and will run on this basis in the European elections of 2009. It is time to awaken the “Sleeping Beauty” of European democracy, which is in fact the European Parliament, by having European citizens elected who have the intention of representing the citizens of Europe, rather than career politicians who seem to like the idea a nice salary whilst they retire from national politics.

The European Union has become far too important for all of our daily lives to be left only in the hands of national parties and of bureaucrats who are out of control.

Armed with 16 proposals that have emerged from debates with 10000 Europeans in 100 towns in 25 countries, Newropeans is proposing a totally new vision of a “democratised” EU, based on the citizen, and breaking completely with the “Euroconformity” of the European and national institutions. These 16 proposals will be progressively added to and refined up until 2009 so as they can constitute the basis of a political platform, devised by the members of Newropeans, in order to present to electors a comprehensive vision of the EU which proposes European solutions to the challenges that have to be met from Helsinki to Lisbon and from Athens to Dublin.

In parallel to the European elections, Newropeans will fight outside of the framework of the elections in order to promote other aspects of democracy on the EU level, notably in all community policies it will seek to make those who are currently “beneficiaries” into genuine “partners” in the European project.

Newropeans, a political movement with a self-decided “limited life-span”, which is also destined to prevent the rise of extremism

Newropeans is conscious of the fact that the shift to democracy will not happen on its own.

The movement is therefore conceived as being a “catalyst” allowing the transition from a post-war EU built by administrations and national parties into a democratic EU where the citizens and peoples are the motors of the major European decisions, served by a genuinely European competent and effective political class, anchored in the values of democracy, justice and openness to the world. Once this historic objective has been achieved, Newropeans will have lost its raison d’être as seen from today.

Newropeans is also conscious that there are once again anti-democratic, extremist and xenophobic political forces that are emerging on the European level, trying to make Europe inward looking, and rejecting its internal diversity. They feed on the “political vacuum” which is currently at the heart of the European project and the fears that this generates in our populations. Newropeans believes that the European elections of 2009 will be the first major confrontation between its hope for democratic EU that is open to the world and a “national-Europeanist” view, which risks repeating the European nightmare of the 1920s and 30s. It is certainly not our national political parties, which lack credibility on European issues, which will be able to oppose these negative forces with any success.

Newropeans is conscious that it is a political force with a « limited life-span » of between 10 and 20 years maximum : the time that is needed to make successful the transition to a democratic EU, which is its only and unique objective. That is the reason why Newropeans will not present candidates in any national, regional or local elections. Moreover, any European citizen, even one who belongs to a national, regional or local political force, is welcome to join this first political movement at the level of our continent. The only individuals who are automatically excluded are members of anti-democratic or xenophobic parties, as well as officials of the EU institutions (for as long as they are covered by the life-long judicial immunity which Newropeans wishes to see eliminated with a view to maintaining the principle of equality of each citizen before the law).

Newropeans, an instrument to help the EU expand the frontiers of democracy in terms of size and of diversity, an essential contribution to the world in the XXIst Century

Making the EU more democratic is an issue for all citizens.

It is hoped that Newropeans can be an instrument at the service of citizens to allow the necessary evolution for our future and that of our children.

It is furthermore hoped that the European project could be a bearer of hope for other continents which are attempting regional integration, such as Africa, Latin America, and parts of Asia etc. For the planet one of the central questions of the XXIst Century will be to reply to the question “how can we combine the immense diversity of size, of culture and of power of the countries around the globe whilst avoiding that the strongest dominate?”

⇒ If we, in Europe, are capable of proving, by example, that it is possible to expand the frontiers of democracy in terms of size of population and diversity of cultures and to show that it is possible to govern democratically a political entity of 500 million people of almost 30 nationalities, and respect national and regional democracy, then we will have also contributed to improving our planet in the most efficient manner possible: by means of example, rather than preaching.