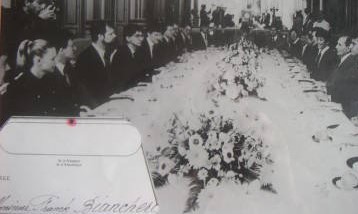 Thank you so much for your paper entitled  “Once Erasmus, Always Erasmus”? Not in My Case” (The AEGEEAN – 26/01/2017) which challenges us strongly, we being the Friends of Franck Biancheri Association (AAFB) and knowing Franck was the founder of Aegee-Europe and a major actor of the political adoption of the Erasmus programme.

Actually, without the support of Franck Biancheri (who unfortunately died in 2012) and the Aegee-Europe students in 1987, Erasmus wouldn’t exist today.

However, it is very important to point out that, in the spirit of Franck Biancheri, then President of Aegee-Europe, this programme was seen above all as a wonderful democratic springboard for students to European mobility, regardless of their background, social and economic origins; especially those students who did not belong to the elitist circles of the “grandes écoles” (as is still known today in the French system) or other privileged, private and therefore expensive high education institutions (such as the English university system).

In 1987, neither Franck Biancheri nor the Aegee-Europe students had imagined that this programme would one day celebrate 30 years of existence, and as you pointed out yourself, there is still a bitter-sweet taste of it.

15 years ago in 2002, when the European Commission celebrated its millionth Erasmus student, Franck Biancheri raised the same questions as you did, Zahia, in your article. His paper was named “ERASMUS … and then what ?“. At the time, Franck Biancheri mentioned with despair that the Erasmus programme, rather than giving the vast majority of students the opportunity to study in Europe, was reduced to a socially elitist bureaucratic machine providing only to 1% of students in Europe the chance to be mobile.

The discovery of Europe remains the privilege of a very small minority of students, often from wealthy families because of the weakness of the scholarships –  he wrote.

For Franck Biancheri it was not only a matter of dealing with the education or training of professional human resources; it was about citizens, a vision that he also included in his little blue book “The emergence of Euro-citizens – a brief History of Aegee-Europe” (Editions Anticipolis).

Dear Zahia, we have republished Franck Biancheri’s article, which is addressing you in particular, as it also contains proposals to redefine what a new European education policy would be; it could very well serve as a basis for reflection to make Erasmus accessible to a greater number, of course, but above all to guarantee the right to access the European dimension, a tremendously important aspect of each citizen’s educational process…

11:11 AM
Marianne Ranke-Cormier
Previous: ERASMUS … and then what ? Five proposals for a new European policy of education by 2010 (Franck Biancheri, 2002)
Next: How Nigel plans to Trump the EU out of existence whilst Boris and Vladimir give a helping hand, by Adrian Taylor