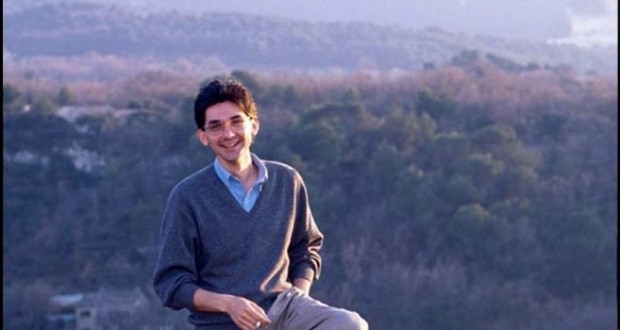 Posted by: Marianne Ranke-Cormier in In memoriam, In memoriam 2017, Tribune 05:05 PM

Franck Biancheri, was born on March 11, 1961. Following his death in October 2012, at the age of 51, the association of the Friends of Franck Biancheri held its very first Agora on March 11, 2013, already five years ago, and yet it’s like it was yesterday.

Franck is so present, in the heart and memory of his parents, his daughter Carla and she who was his life-companion, Marie-Hélène, as well as his friends, but also for millions of Europeans, young and old, those who attended the Erasmus courses or Aegee. Wherever they are and whatever routes they have taken and are still taking, it is Franck Biancheri who brought them together, who still brings them together today and will bring them together tomorrow.

In five years, thanks to the commitment, loyalty and support of its members, the work of the AAFB has been immense and fruitful for safeguarding the memory of Franck Biancheri and his work. A memory that we also have to defend against some attempts to divert his image, because the greatness of Franck Biancheri, unfortunately, is also abused by some people to legitimize words and activities that are the opposite to what he defended during his life (one of the reasons why we created the heading “Not in the name of Franck Biancheri“)

Franck Biancheri was a visionary, with an intelligence rooted in the culture of the Europeans and the world, a deep knowledge of humans and people, and their history, those who make Europe, and participate to what the European Union is. Profoundly a democrat, his fight was to elevate Europe’s citizens to first-class European citizens by providing the necessary political tools. So, as a student, he fought for Erasmus. Thus he created the first network of European students, AEGEE, still successfully developing today, mobilizing young people who are proud to talk about their founder. In the 1989 European election he founded the first trans-European political party, the Initiative for European Democracy (IDE), and in the 2009 European election he created Newropeans, the first trans-European political movement, showing that it is possible to innovate in the field of European democracy, to create trans-European lists, to present a common trans-European program, the foundations of which are now being taken up by new political movements, such as DiEM25 for example. He created different European think-tanks, Prometheus-Eurpope (1989), Europe2020(2000), LEAP2020 (2004) of which he was Research director (and only of LEAP2020), and launched in 2006 the the very first letter on the Global Systemic Crisis, the GEAB (global Europe anticipation bulletin) of which he was the editor-in-chief, and is still published today thanks to Marie-Hélène Caillol, his companion. He was the initiator of the method of political anticipation, in 2006, Euro-BRICS and Euroland projects … and so many other citizen projects to help the advancement of democratization and “peaceful” European strength… So many ideas, projects and innovations nowadays continued (well or bad) by the political, economic, academic and intellectual classes in Europe, even if his obvious fatherhood is not very rarely attributed and recognized.

This is why we are continuing our duty of publication of his works – the FB Doc Selection section is enriched week by week like the public database of Franck Biancheri Documentation-, and why we continue our action of defence of the memory of Franck Biancheri.

We are very proud that young European students follow these tracks, like the Aegeans, who organize each year event inspired by the founder of their movement in the framework of the Franck Biancheri Award (FBA). This year we had the pleasure of awarding the prize to AEGEE-Salerno for the organization of the Franck Biancheri year, including a conference from 13 to 15 April “Representation needs participation: European elections” which you are of course invited to join!

And on this birthday we are particularly happy to announce the creation thanks to Aegee-Bergamo of the very first “Franck Biancheri” library section in Bergamo’s public library! A very moving homage for this grand-son of Italian immigrants.

Thus, we measure the timeless dimension of the work and personality of Franck Biancheri, but also the reward of your faithful support and perseverance.

Happy birthday Franck, we hope to see soon the inauguration with Aegee-Bergamo of this first library section which will bear your name!

The Nucleus Committee of the Friends of Franck Biancheri

∴ To pay your membership fee 2018 follow the link here: Support us! (for any contribution to 125 €, we offer the booklet “In memoriam Franck Biancheri 2017” and the unpublished book “Europe: Community or Empire” by Franck Biancheri)

Previous: Divorce: Community vs. Public Opinions: Forgetting any respect for diversity (Europe: Communy or Empire? by Franck Biancheri, 1992)
Next: A silent tear for Franck Biancheri (LEAP2020)