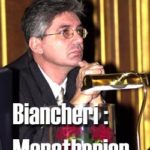 In 2003, Franck Biancheri did something unique, unprecedented and unrepeated ever since. Him alone toured the whole of Europe during one year, debating on “Where is Europe going?” with citizens in 100 different cities : the Newropeans Democracy Marathon, from Portugal to Britain, from France to Estonia, from Finland to Serbia, Franck Biancheri crossed Europe. He crossed the European continent “on foot, by bike, by car, train, plane …”. He traveled more than 150,000 kilometers, out of which he covered 40,000 by car within 8 months! For this physical and intellectual feat, he was elected European hero of the year by the readers of Time Magazine. Franck Biancheri met nearly 10,000 Europeans during 300 hours of debate and exchanged ideas in all possible languages, including the language of deaf-mutes in Latvia. The paper (in French) reported in August 2003 about this trip crossing the Baltic states: Klaipeda, Tallinn, Tartu, Malpils, Riga, Valmiera. This article is only available in French:

Previous: AAFB’s yearly July nucleus strategic meeting in Amsterdam
Next: With the Apple case, Europe does not call into question the optimization, but the fiscal dumping (Leap2020)