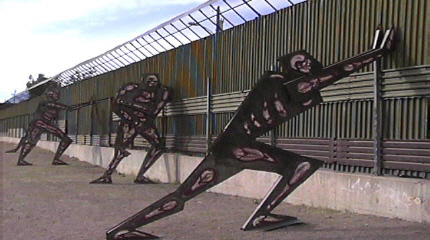 EU BORDERS – The end of the myth of eternal enlargement; Russia, the key to solve the EU-Turkey problem (Franck Biancheri, 2006)

Posted by: Marianne Ranke-Cormier in FB Doc Selection 09:11 AM

Turkey-Ukraine, two countries which will not join the EU, the Balkans, last enlargement of the next 20 years, Russia, the key to solve the EU-Turkey problem

The increasing difficulties of the process of Turkey entering the European Union contrasts with the progressive entry “piece by piece” of the former Yugoslavia/1 (Slovenia is already a member and Croatia is starting its integration process while proposals to integrate the other Balkan countries multiply)/2.

This contrast is all the more striking if one compares the evolution in public opinion with regard to the EU in the various countries concerned. In Turkey, the image of the EU and prospect for integration have been deteriorating regularly since the end of 2004 (the symbolic date of the EU “green light” to negotiations); whereas in the countries of former Yugoslavia the opposite trend can be seen.

As far as the European public opinion is concerned, with a general background of “tiredness” with the endless enlargement/3, the team of LEAP/E2020 notes an essential evolution which can explain these divergent developments: European citizens now reject two very specific elements of the enlargement, namely on the one hand “big” enlargements which imply countries with large populations which can call into question the great internal balance of the EU, and on the other hand, enlargements which “do not finalize” the European construction but which, on the contrary, push identity and limits towards more uncertainty.

Under these conditions, it is not surprising to see a strong and increasing popular opposition to the integration of Turkey or the Ukraine (which does not even have the statute of a candidate), whereas the integration of the Balkans, without raising enthusiasm, does not cause strong oppositions. Indeed, the accession of Turkey or the Ukraine to the EU would involve a fundamental redefinition of the identity of the EU and its limits; whereas the integration of the Balkan countries seems a “completion” of the work of a continental unity started 50 years ago. In addition, the populations concerned in the Balkans are proportionally very small compared with those of the EU, whereas Turkey or Ukraine would imply demographic upheavals in the EU.

For the researchers of LEAP/E2020, who are convinced that the only internal political force in the EU is now on the side of the public opinion/4 (since the institutions lack legitimacy, operational competence and vision for the future), the evolution of the relations of the EU with Turkey and the Ukraine on the one hand, and with the Balkan countries on the other hand, is thus easy to anticipate and has only a very little to do with the official agenda of the EU. Future enlargements are indeed as much out of reach of institutional decisions as the future of the EU constitutional project. Neither Turkey, nor Ukraine will enter the EU in the twenty years to come. However, at the same time, and even in a period of one decade, the whole of the Balkans will be integrated into the EU.

LEAP/E2020 believes that in order to avoid a dangerous dead end, at the latest sometime between now and 2010, after the next European elections which throughout all the EU will sanction the political parties in favour of the “great Eastward enlargement”, the EU will be obliged to propose Turkey with a “strategic partnership” and clearly explain that it is the alternative imposed on a process of integration here but to the rise of anti-Turkish feelings in the EU, and anti-European feelings in Turkey. At this stage, the Turkish power, in its dual form of a “democrat-Islamic” and “military-secular” set-up will be largely open to such an alternative since it does not have any interest in a real integration. Indeed, for each of the two components of the Turkish power, EU integration is useful only as a “project” making it possible to mobilize the population, but in no case as an “effective realization” destroying the non secular or non democratic bases of one or other group.

Paradoxically, according to LEAP/E2020 researchers, the solution to this EU-Turkey “fools game”, which has gone on for 40 years, will be provided by Russia. Turkey will indeed reject any alternative to the integration which would place it in a zone known as “vicinity” where it would be together with the Maghreb countries, Egypt, Lebanon… The Turks (leaders and population), for obvious historical reasons, believe they belong to another “category of players” than these countries. However, there is currently a country which belongs to the “category” to which the Turks estimate they belong (i.e. the “big players”) and who does not wish to enter the EU, while wanting to build a particular partnership with it, “a strategic partnership”, and it is Russia.

As pointed out by the LEAP/E2020 team, which took part in the 2020 GlobalEurope EU-Russia seminar last October in Moscow/5, what is missing today in the EU offer to Turkey is precisely a type of partnership allowing Turkey to walk away from the obvious dead end that the process of integration is “with their heads held high”. To be seen in the same category as Moscow is undoubtedly better – seen from Ankara – than being classified with Tunis, Beirut or Algiers. For the EU, the benefit is obvious since that removes one of the most corrosive phenomena in its relationship with the public opinion. For Moscow, such a comprehension can only help to convince the reticent community institutions to give up their condescending attitude and really begin a true and long-lasting partnership. This evolution is in fact already in process because of questions relating to energy/6.

1/ To which will be added that of Albania, if only because the Kosovo situation is closely linked with the integration of the three entities which are Serbia, Kosovo and Albania.

3/ Beyond survey results which clearly indicate this “dissatisfaction” regarding enlargement, the LEAP/E2020 team has the good fortune to be regularly on the ground throughout the EU and thus is able to qualify this analysis. In almost all member states, the question of Turkey’s integration has left the field of “surveys” and has entered the field of national vote decisions. Henceforth, among all questions which are likely to determine the national vote of a great number of voters, and for the great majority of them, the question of Turkey’s integration has only one answer is suitable, that is opposing the integration. It only takes a quick look at the main candidates for the national elections in the various countries of the EU to understand that the question of integration will have no “political supporter” in the EU in about 2 or 3 years.

4/ See the Democratization and Institutions sections of the Europe 2020 site, as well as the Vision Europe 2020 publication.

6/ The long-term weakening of the American influence in Europe deprives Turkish integration of its main supporter.