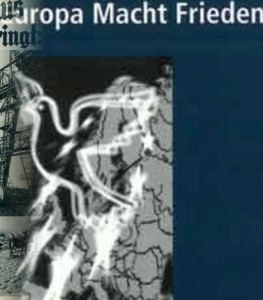 24-10-2006 – European totalitarian regimes love strong slogans. Remember the slogan put at the gate of concentration camps by the Nazis : “Arbeit macht Frei” – “Work makes Free”! Or the sentence you could find all over the Communist block for decades : “Communism is Peace”!

Now, we have a new one, placated throughout the EU’s main airports thanks to European Commission’s funding : “Europe is Peace”!

Whether you take off from Vienna’s Schwechat airport where you cannot miss the huge posters claiming “Europa macht Frieden” or you land at Paris-Charles de Gaulle being greeted by large posters claiming “L’Europe fait la paix”, you definitely are exposed to the type of self proclaimed truth which is a typical product of bureaucratic mindset and zealot belief. Both are required to move along the way leading to totalitarianism, where doubts are forbidden and questions are simply out of question.

Such slogans are made to force the identification of a political concept or principle of the existing regime with a positive, strongly emotional ideal such as freedom or peace.

Therefore, for European citizens, these posters are very frightening for at least three reasons :

. first, because they show that the European Commission has lost all contact with European history. It is indeed amazing to think that no Eurocrat has noticed that these slogans where exactly the copycat of those used in the Communist system. For the Eastern and Central Europeans who use those airports, having joined the EU appear more and more like having traded Moscow for Brussels! This lack of understanding of modern European history is by the way echoed by the current declarations of Margot Wallström regarding the symbols of Franco-German friendship, thus displaying a very serious inability to be the Commissioner in charge of the communication with EU citizens. At least she is consistent in her incompetence as most probably the “Europe makes Peace” campaign has been approved and funded by her own services in Brussels!

. second, because neither the European Council, nor the European Parliament have reacted. It is very unlikely that no EuroMP or national politician took off or landed in an EU airport in the past three months, which means that those people do not see such slogans as a dangerous indication that not only the EU is loosing touch with its citizens, but that it is also disconnecting from its own history, and from one of the very reasons why it was created. As Eurocrats, EuroMps and national politicians are most probably reading this article, I feel compelled to remind them that one of the key reasons why to built the EU was to prevent totalitarianism to take over the Europeans once again!

. third, because, as Newropeans, I see the EU’s future as a hope built by 500 millions citizens, not as a dream imposed on 500 millions subjects. Europe’s history has taught us that dreams and nightmares are the two faces of the same coin. Therefore, historically the European project is based on rationality, on the understanding that it will be difficult, that it will require a lot from the Europeans, that it may fail and that is in an ongoing process with no ‘utopian end’; in a word, it’s a hope, the European hope.

Those absolute slogans, “Europe makes Peace”, where one cannot find any room for doubts, questions, uncertainties, are projecting a completely opposite vision of the future. They pave the way for a future where the Europeans are nothing, what counts is “Europe”, the “European project”. Such a vision rejects the people as mere instruments of a continental destiny. Individuals are nothing then. How can there be a free citizen if thinking differently from the leadership can mean being opposed to absolute positive values such as “Peace”? One more word and this very citizen will be classified as a terrorist! Cross the Atlantic today, and you will find a very good example of such a society!

This “airport’ slogan case” could be seen as a detail. Some could accuse me of overplaying an irrelevant communication mistake. But I would strongly disagree with them, as in my opinion this communication’s strategy gives a vivid example of one of the Newropeans “raison d’être”.

Indeed tomorrow’s EU will be governed. No doubt about that.

The key question is therefore : will it be governed in a democratic way or in another way? And if you still doubt that some forces within the existing EU institutions have other ideas in mind than a democratic way, then go to an EU airport and you will be directly exposed to one of the alternative.

Repeat after me : “Europe makes Peace”!

Previous: Europe’s history has taught us that dreams and nightmares are the two faces of the same coin (2006)
Next: Petroyuan and Saudi Arabia: From the temptation of the US “Military QE” to the creation of a Middle East 3.0 (GEAB 119, Nov. 2017)