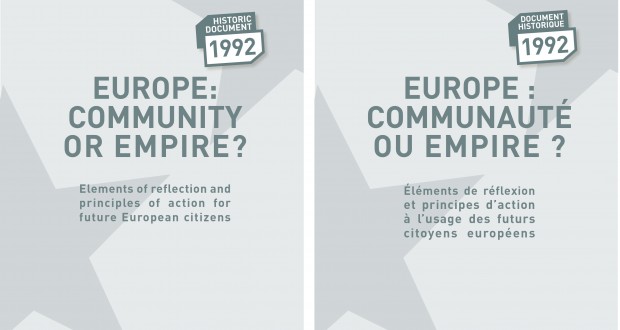 The European Community: to continue building the bridge towards tomorrow. (“Europe: Community or Empire?” by Franck Biancheri, 1992)

“How do I see the European Union? In a single sentence: as a community of values and a partnership of 27 sovereign states that make each other stronger when a joint approach is needed, and keep to the agreements they make.” – Speech by the Prime Minister of the Netherlands, Mark Rutte, at the Bertelsmann Stiftung, Berlin, 02/03/2018

In contrast to an institutional “unionist” discourse (which the European peoples do not seem to want) the term “community” is reborn. It is taken up by those who sit on the European Council, and make the politics of Europe, certainly in the light of national interests, of those who elected them, but not always, as the 70 years of European construction that they accompanied can show. We welcome it as an answer finally given to the question that Franck Biancheri asked more than 25 years ago, in 1992 on the day of the signing of the Maastricht Treaty: Europe: Community or Empire?. 25 years after this questioning on the future of Europe it is clear that this Union is indeed in danger of drift imperialist, with the vision of an enlarged Europe in all its forms, a Europe of institutions rather than people, beneficiaries rather than citizens.

We invite you to live a fundamental historical “look-back” to understand the subtlety of the evolution of this Europe since 1992, immersing yourself in the unpublished book by Franck Biancheri, finally edited by Anticipolis: “Europe: Community or Empire?” of which we offer you a new extract here.

III – Europe is not the Community

The European Community is a judicial-political concept. Its origin day is known perfectly well, the day of the signing of the Treaty of Rome on March 25, 1957. Its geographical boundaries are also known by the metre, since its territory covers that of its member states. Its central parameter is hitherto recognisable by the nature of the treaties and rules of law on which it is founded and organised. The Community has nothing in common with Europe, except that it is taking shape in Europe! It is the most recent collective expression in the political field of European “action and reflection”. By analogy, one could say that politico-social engineering is certainly one of the most complex technologies, of which the Community is the ultimate, the state of the art. By virtue of its vocation, it touches such a wide range of domains that it tends to be assimilated to the framework welcoming it. So, there was State and Nation first. Yet the two concepts are different. This seems to be the case today for the Community and Europe. And since there is only one community in Europe, this reinforces confusion even further.

The Community is therefore both an instrument, a technique and a method, whereas Europe is a constantly evolving framework, a past or present reference, never a future one, a multidimensional space unknowable as a whole, as it is always evolving. It is a historical and cultural concept, enabling Europeans to conceive the Community and providing them with the means of implementing it. Like a bridge constructed one arch after the other, we must rely on the preceding one to build the next one. Europe represents this bridge which has been launched through time and which is gradually progressing. Originally, as it was still very small, to differentiate it from other bridges we only had to designate the place of its beginning, namely the European continent. Over time, it has become a large bridge, which has crossed or rubbed alongside so many other bridges, it has abandoned certain directions to take back some other ones. Other bridges have touched the European continent and Europe has touched other continents in its turn. Hence it has become more convenient to define it by all its arches and ramifications (its history), the styles, techniques and methods it used (its culture) in order to be able to distinguish it from the others.

For 35 years Europeans have been building a new arch through an entirely new method, which seems to be more fertile than other preceding ones: The Community method. This method allows to explore new bridge styles, if those using it are imaginative and daring enough. Otherwise, it will only replicate past mistakes, leading to a dead end. That’s where we are right now…

IV – What is the Community?

Special offer for our readers: Purchase two books for the price of 30 € !
and support the activities of the AAFB! 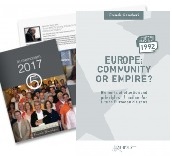 NdlR: In December 1996, the European Monetary Institute is using a graphic project for the verso of the Euro banknotes a bridge which is characteristic for European history.

12:50 PM
Franck Biancheri archives
Previous: A library for Franck Biancheri. A survey initiated by Aegee-Bergamo
Next: United Kingdom 2019: What if Brexit proved to be a success story? Public review GEAB-123, March 2018