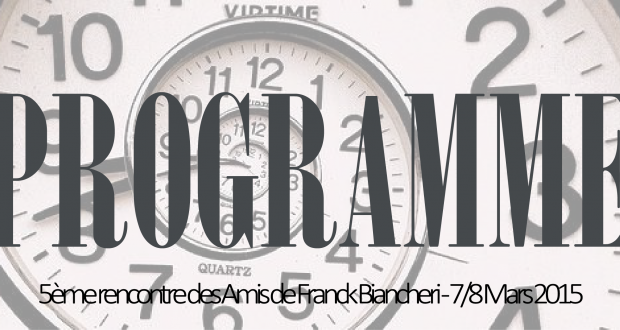 . Report of the treasurer and membership system (Pierre-Marie Pagès and Christel Hahn)

. Report of the coordinator (Léa Charlet)

– archiving of Newropeans and Europe2020 material

. Overview of  the rest of the Franck Biancheri Networks activity (Marie-Hélène Caillol)

. Presentation of the Transeuropean Political Newropeans Club for the Democratization of Europe.

. Presentation of the current actions of the political parties invited (5 min/each)

Plenary session on the « Seven Europes to build », organized by the AAFB (moderated by Veronique Swinkels)

Since 1989, a common currency without political governance and the deployment of a free trade area purely based on economic ambitions, here is what the European construction can be summed up to. Europe? But what Europe?!

Marie-Hélène Caillol, President of the AAFB

The crisis in Ukraine would not exist if the EU had set up a common energy policy, giving it the means to negotiate on equal terms with Russia and the United States – an unacceptable situation, given the EU’s origins: the ECSC. The current situation requires a European energy policy to ensure our continent’s energy independence, equal supply and preservation of conditions for peace.

Each day, the Ukrainian crisis shows that control of one’s armed forces is essential in order to control one’s own destiny. Getting clear from US military tutelage is a sine qua non for the conclusion of the independent Europe project. This grasping of strategic independence provides the best subject for Euro-Russian cooperation, by the way

The deep and justified criticism of the independence and quality of information must finally result in solutions that only make sense when they are applied to the entire EU; for instance through the creation of an independent media watchdog ensuring the impartiality of information;  and, of course, the creation of multilingual trans-European media.

Structurally, the Member States are no longer in the capacity to levy tax optimally; the European level must take the responsibility of the exchange facilitation it enabled and that no one denies, by establishing a fiscal Europe which could start by clarifying the share of European tax they already pay to all European citizens.

The euro has seen the light of day, but it does not have a governance adapted to the challenges related to 19 countries sharing one currency… thus, what should have been a tool of independence and sovereignty has ultimately become the EU’s Achilles heel. Euroland’s political and democratic union is, therefore, a project for the ERASMUS generations.

Keynote: . Representative of the Dutch Minister of Finance and President of the Eurogroup, Mr Jeroen Dijsselbloem

The crisis of public deficits and the austerity that followed revealed that the Member States can no longer afford their social policies; while this crisis certainly provides an opportunity to rethink these social systems, it should in no case lead to their removal. It is up to the European level to set the new social criteria and to facilitate their proper and consistent application across the whole continent.

The euro has seen the light of day, but it does not have a governance adapted to the challenges related to 19 countries sharing one currency… thus, what should have been a tool of independence and sovereignty has ultimately become the EU’s Achilles heel. Euroland’s political and democratic union is, therefore, a project for the ERASMUS generations.

15.10 – Signing of the Democratic Alliance