In the twilight of a chapter of European history and at the dawn of a new one, this year 2020 now common to all textbooks on the History of Europe (and the world), Association des Amis de Franck Biancheri (created after his death in 2012) wished to compile and hand over this directory of the first generation of Euro-citizens to Fondation Jean Monnet pour l’Europe. This book is being added to all the other documentary archives which were already transmitted to the foundation in 2019.

Before these Euro-citizens, there were the Europe of Wars, the Europe of Empires, the Europe of Trade, the Europe of Arts, the Europe of Coal,… Nevertheless, a political Europe is nothing but a dream of the 80s, conceived by prominent figures like Mitterrand, Kohl, Lubbers and other great Europeans at the helm of the nations composing a European Community which, inspired by the Founding Fathers, was at one time understood as the most innovative political project of the end of the 20th century.

Within the same movement a vanguard of Euro-citizens rose up. Shoulder to shoulder with the great leaders and the European institutions, they won a first battle, that of the Erasmus programme, demonstrating that Europe needed citizens to open up the paths of the future.

Both a vision and a mission were born. A whole generation of Europeans could get started, helped by Erasmus, but also by the disappearance of borders, the evolution of communication techniques, the arrival of high-speed trains… and helped by the common currency, the euro.

The democratisation of Europe, the first trans-European political parties, the first European media, large networks of Europeans… these generations made their voice heard.

Listen to the echo of their battles in the pages of this directory!

As the rumblings of History thwarted their projects, the most motivated perfected their speech, formalised their methods of action, and refined their understanding of reality.

In 2020, our heroes are tired but they have accumulated unique experiences. Some are still ready to fight, others less so, but all of them have a duty to pass on their knowledge, we believe.

The new generations have global challenges to face: rethinking global governance, inventing new models of democracy (exploiting digital evolution to serve the very large numbers), finding new sustainable economic models, putting new technologies at the service of the well-being of human societies, … But, whatever they choose to fight for, their degree of influence will depend on their start point.

And yet, when it comes to understanding the world and political action, the European level is undeniably the most relevant. The lessons of managing diversity, of integrating complexity, of assimilating different histories, of cross-border collective action, … all these are valuable assets that the European dimension has offered us, and on which we must reflect carefully in order to pass on the best of it to the upcoming generations.

It is therefore not only to the Fondation Jean Monnet pour l’ Europe that we are presenting this directory. It is also to those who co-signed it so that they may become publicly visible and be able to combine their respective intelligences. But the final target is, of course, the new generation who, now that the baby boom generation is fading away, must discover this courageous and little-known large group of people whose strong European feature will help them play a more useful role in tomorrow’s world.

Therefore, allow us to introduce to you the Generation Europe…

The Franck Biancheri Heritage Community Eurocitizens Directory 2020 is a project initiated by the AAFB with the support and for the archives of the Jean Monnet Foundation for Europe. It lists, on a voluntary basis, members of the first “Generation Europe” who crossed paths with Franck Biancheri in his research, education and activism activities.

Order the pdf file to download or the printed book here: 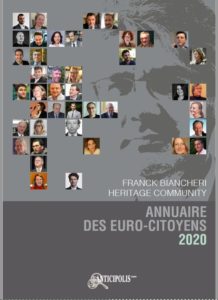