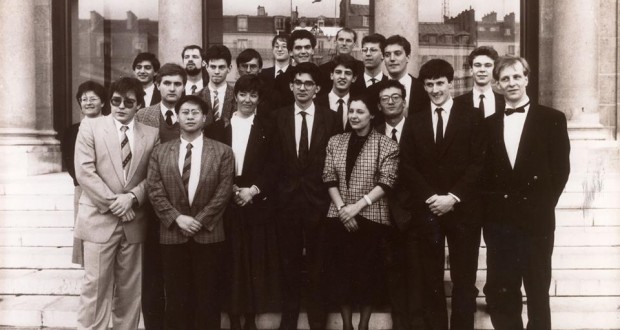 Erasmus, Franck Biancheri and the meeting on March 8th : Relations

On the steps of the Elysée, the day of the famous lunch with President Mitterand

This event is organised by Association des Amis de Franck Biancheri in partnership with AEGEE-Paris.

Association des Amis de Franck Biancheri was created by his friends and road-companions two years ago in the aftermath of Mr Biancheri’s passing away on October 30th, 2012, at the age of 51.

The aim of the association is to pay tribute to Franck Biancheri’s relentless fight for EU democratisation 25 years onward – from 1984 to his death, through:

. collecting and organising all material available on his work and making it public in a “Franck Biancheri online documentation centre” (ongoing project)

. making sure this work continues in a way that is consistent with Franck Biancheri’s principles through active coordination of all organisations and projects inherited from him

Franck Biancheri’s history starts in 1984 when, as student at Sciences Po Paris and head of the Bureau des Elèves, he organises the first Etats Généraux des Etudiants d’Europe, a congress which gathers students from the Grandes écoles parisiennes (Polytechnique, HEC, Sciences-Po, etc…) and students from prestigious European universities. From this historical congress was born the first trans-European student association, AEGEE-Europe, which in just a few months developed into dozens of antennae throughout Europe (today, AEGEE-Europe gathers 13,000 members in some 200 antennae Europewide). Soon after its creation, the association found out about the project of a trans-European student mobility programme and was eager to see it happen… until it realised that despite the political will of national governments and the technical capacity of the European Commission to launch such a programme, national Ministries of education were in fact slowly but surely burrying the project. This situation brought Biancheri and AEGEE-Europe to their first feat : elaborate a strategy to unblock the adoption of the programme. Afther months of top-level “lobbying” in France, Germany, UK, Netherlands…, the strategy resulted in a lunch at the Elysée Palace between Biancheri and his team of Europeans on one side, and Mitterrand and his team of advisors on the other, in order to pass on to the President a message that the programme he wanted was not going to see the day of light. The next day, Mitterrand was reaffirming his will to see the programme exist and ERASMUS was finally adopted (on the adoption of ERASMUS thanks to AEGEE-Europe, here are three interesting testimonials : by Franck himself and here, and by Mr Lenarduzzi, formerly European Commission)

What Biancheri learnt from this experience was that Europe would go nowhere without its citizens and that EU democratisation was needed not only for moral reasons but for technical reasons of basic efficiency.

The euro crisis has revealed the relevence of Biancheri’s work which appears today as a major source of inspiration in solving the crisis.

This next March, AAFB wishes to celebrate the 30th anniversary of the creation of AEGEE-Europe. It has therefore established a partnership with AEGEE-Paris, where everything started 30 years ago, and organises this March 8th event. Two hundred people will meet, both students from the European network of AEGEE and friends and followers from the Franck Biancheri Networks (Facebook page dedicated to the event).

The theme chosen wishes to highlight :

. the political dimension of the current European crisis

. and the potential of solution to this crisis provided by the ERASMUS generations.

Indeed for 28 years now, the ERASMUS programme has been producing hundreds of thousands of Europeans professionals and citizens today spread throughout the entire scope of our civil society, including at increasingly high levels. This provides the conditions for the realisation of a convergence of interests among the actors of European construction : students, citizens, politicians, civil servants, journalists, entrepreneurs, etc… whom wil will invite to sceal a Democratic Alliance on March 8th.

Practically speaking, the event consist of a 5-hour plenary session mixing keynote speeches, students’ reporting from workshops help on the previous day, and debates on a list of identified “chantiers” for Europe to be triggered as a matter of emergency: Europe of energy, Europe of industry, Europe of jobs, fiscal Europe, social Europe, Europe of the media, Common Defence Europe, Europe of the euro, political Europe. More information on the 5th Meeting of Franck Biancheri’s friends.