Remembering the extraordinary personality of Franck Bianchery who foresaw a Europe-Russia (Europe – BRICS) union well before it could be accomplished and giving tribute to his intelectual legacy, my thoughts and reminiscences, of one of those, who I came to khow him personally to the society of friends, to the family and to those who still continue his work for the future of European generations.

Euro-BRICS is a project of LEAP (Laboratoire européen d’Anticipation Politique) initiated by Franck Biancheri in 2010 in the context of the partnership with MGIMO University, with the objective to contribute to a rapprochement between Europe and the BRICS countries. The first EURO-BRICS seminar: What can be the contribution of Franco-Russian relations to EU-Russia strategic partnership and the holding of a BRIC-EU meeting by 2015? took place in Nice 23/24 Sept 2010- 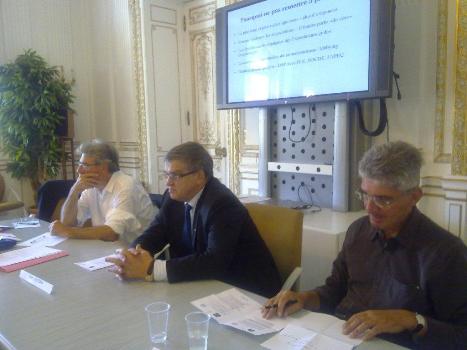 Franck Biancheri next to Valery Vorobiev, vice-rector of the MGIMO in Nice, Sept 2010

in Nice, Chateau Valrose, Septembre 23-24  2010, organised by LEAP in partnership with MGIMO