American ‘democracy’ holds no surprises: two Democratic mandates then two Republican mandates, followed by two Democratic mandates and another two Republican mandates… It is on this basis – raising questions about levels of democracy involved – that the system has satisfied the Americans for two hundred years, by convincing them to remain calm, because their turn of representation can never be more than eight years away.

The exceptional circumstances that this country and the world have been going through for the past twelve years have, on three occasions already, led our team to anticipate snags in the aforementioned multi-decennial routine. But nothing has deviated from this mechanical timekeeping; even if the arrival in power of Donald Trump was (perhaps) a first bug,[1] the general outline was still respected. We should, therefore, learn from our mistakes and wisely anticipate Trump’s re-election for the second term he is entitled to. But the GEAB is not here to anticipate the obvious and we prefer to come up with scenarios of change: very important to bear in mind, in any case, to better understand the future and its mischievous nature.

So, we are not going to anticipate Donald Trump’s re-election. But that doesn’t mean that we see Joe Biden as the next President at the end of the year. At this stage, what piques our interest is the profound change in the underlying rationales of power in the US, following the general questioning that has taken place over the last twelve years… Abstract in US Election 2020 – A New America takes over (free excerpt GEAB 145) 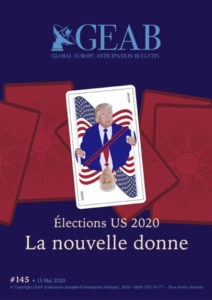 The new GEAB is out! In summary:

Previous: Open Letter for a EU “Marshall” Plan for Training and Education to Avoid the Socio-Economic Collapse
Next: From “laissez-faire” to “let die”- Americans in distress (quotations from Franck Biancheri, 2005)