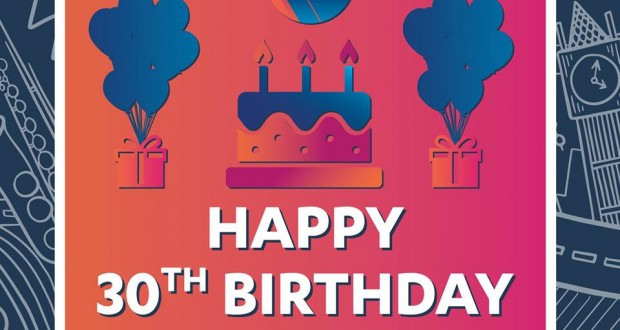 Today Erasmus is 30 years old and we are offering you a special edition to cover this event. We are particularly proud to celebrate this anniversary. Because the success of this program is also the success of Franck Biancheri and AEGEE-Europe students who in 1987, as the prince charming delivered the Princess asleep.

Franck Biancheri’s history starts in 1984 when, as student at Sciences Po Paris and head of the Bureau des Elèves, he organises the first Etats Généraux des Etudiants d’Europe, a congress which gathers students from the Grandes écoles parisiennes (Polytechnique, HEC, Sciences-Po, etc…) and students from prestigious European universities. From this historical congress was born the first trans-European student association, AEGEE-Europe, which in just a few months developed into dozens of antennae throughout Europe (today, AEGEE-Europe gathers 13,000 members in some 200 antennae Europewide). Soon after its creation, the association found out about the project of a trans-European student mobility programme and was eager to see it happen… until it realised that despite the political will of national governments and the technical capacity of the European Commission to launch such a programme, national Ministries of education were in fact slowly but surely burrying the project. This situation brought Biancheri and AEGEE-Europe to their first feat : elaborate a strategy to unblock the adoption of the programme. Afther months of top-level “lobbying” in France, Germany, UK, Netherlands…, the strategy resulted in a lunch at the Elysée Palace between Biancheri and his team of Europeans on one side, and Mitterrand and his team of advisors on the other, in order to pass on to the President a message that the programme he wanted was not going to see the day of light. The next day, Mitterrand was reaffirming his will to see the programme exist and ERASMUS was finally adopted (on the adoption of ERASMUS thanks to AEGEE-Europe, interesting testimonials by Mr Lenarduzzi, formerly European Commission – video)

What Biancheri learnt from this experience was that Europe would go nowhere without its citizens and that EU democratisation was needed not only for moral reasons but for technical reasons of basic efficiency.

This opens the way to rethink where #Erasmus30 is going now? With 4 millions Erasmus parents and their babies, Erasmus generation is representing today 1% of the EU population, rather a weak result in 30 years of existence (it does not even reach the average of the European birth curves).

Why not challenging the programme, the politics and the Erasmus people by proposing to have in 2027, ten years to go, 10% of the EU youth population. This is future of Europe … and this is what Franck Biancheri advocated in 2008 when he called to have 10% of Erasmus students by 2010.

Here are some links, articles, videos and other documents to understand the little biography of ERASMUS and how Franck Biancheri planned to continue the Erasmus adventure:

and of course, ERASMUS: When citizens build Europe – Septembre 2015 – This video briefly tells the story of the adoption of the ERASMUS programme and the major role AEGEE and Franck BIancheri played in the process. Should be watched by all those interested in the ERASMUS programme’s very Citizen-based History or by those willing to be inspired by these European students’ pugnacity! 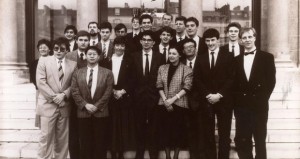 EGEE-Europe students on the steps of the Elysée, the day of the famous lunch with President Mitterand (March 1987) 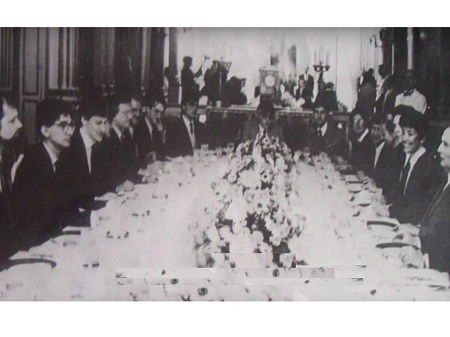 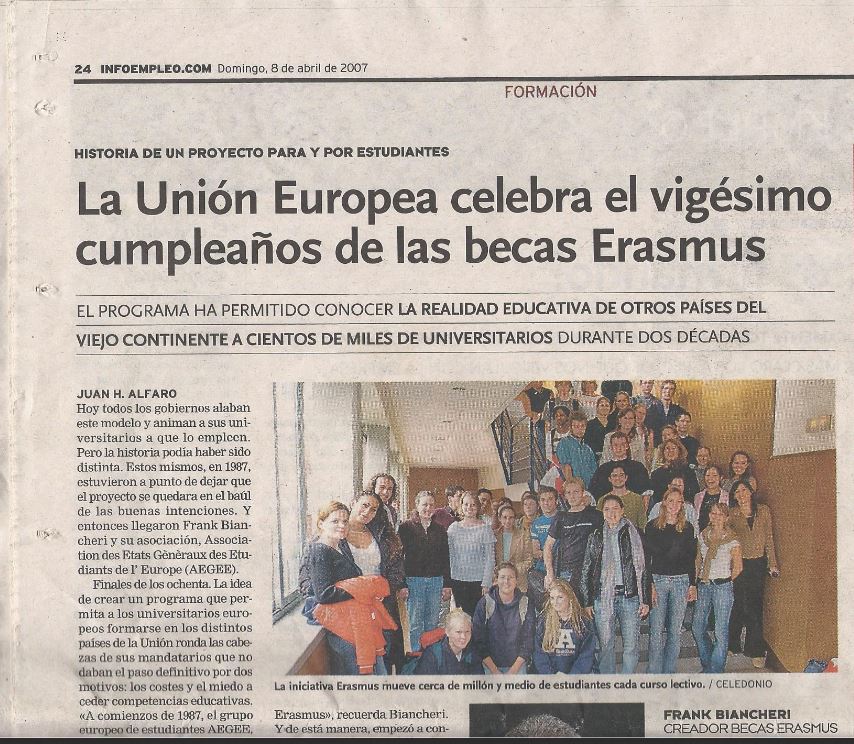 Previous: Press Release: EU civil society at work on #CitizensRoute73
Next: 2019 / Brexit: Towards the reintegration of the new UK into a new Europe (GEAB 116, June 2017)