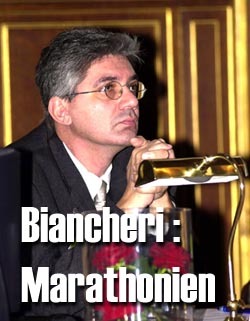 The vision of one man named Franck Biancheri, for the democratic future of Europe until 2020. We are far behind…

In 2005, Franck Biancheri founded the first trans-European political party, the Newropeans, after a first experience in 1989 with IDE (Initiative pour une Démocratie Européenne). Immediately after, the party seized the 15 proposals submitted by Franck  Biancheri in June 2002, in his book entitled “VISION 2020: Reinventing Europe, 2005-2020“. First 14, these proposals became 15 for the purpose of a marathon of conferences for European democracy  between 2002 and 2003. These conferences allowed Franck Biancheri to meet and have discussions with more than 10,000 EU citizens in over 100 European cities on the topic  “Where is Europe Going? Bring democracy to new frontiers in terms of size and diversity“. These  later became the 16 proposals and the matrix of the Newropeans programme for the elections of 2009 and were translated into 20 European languages.

Today we realize that these 16 proposals, which certainly deserve an update, particularly taking into account the more recent institutional changes (Lisbon Treaty, reality of the Euroland…) currently offer extremely practical tools to answer the political crisis that Europe is facing today. That is why the Newropeans Club decided to take this document and confront it with today’s realities, but also to work on a new version that could serve as a programme or as a schedule for a political trans-European citizen platform.

Background of the 16 proposals:

Given the urgency to anticipate and prepare the EU of 15 states for the great Central and Eastern Europe enlargement wave (+ 10 states in 2004 + Romania and Bulgaria to come later + Balkan states) and anticipating the European Council’s decision planned in Copenhagen on 12-13 December 2002, Franck Biancheri in his book “VISION 2020: Reinventing Europe, 2005-2020“, published in June 2002, brought attention to the obsolescence of the European performance, as it had been designed for six member states originally.
He was calling the European political class to anticipate the necessary institutional, strategic, political and democratic changes, if Europe didn’t want to get lost in its own institutional dysfunctions and in the national-European anti-democratic and xenophobic speeches like the ones we experience today. For him, “The key problem for Europe in coming decades is to reconcile democratic aspiration, dream of unity and efficiency: Europe is no longer something to be created, but to be governed efficiently and democratically.”He therefore presents, in June 2002, “14 strategic and operational proposals to build an enlarged European Union, effective and democratic, over the next two decades” in the framework of which he places “the democratic requirement at the heart of the European integration“, and he calls for the introduction of radical and revolutionary reforms within the European governance: a single European executive, a powerful European Parliament, integrating European, national and regional levels, suppression of the College of Commissioners, revitalization of the Council of Europe in order to organize the neighborhood of the European Union, putting under democratic control both EU policies and administrations…These 14 proposals are backed up by 100 pages of analyses and developments and are supported by datelines proving his political assertions. (source: http://www.euractiv.com/future-eu/vision-europe-2020/article-117195)They are addressed to political leaders in Europe, but primarily to Europeans, so that they can use them for their discussions and will be all translated (by volunteers) into 20 European languages.

The Marathon: A challenge that had never been taken before, nor is it taken today by any European politician

These 14 proposals will be the matrix of what will become the Newropeans’ programme.

As a result the initial 14 proposals (15 actually in the marathon) delivered by Franck Biancheri in 2002, will have been presented, faced and discussed within more than 100 debating conferences with the civil society throughout the European Union, on the same question, “Where is Europe Going?”.

From October 2002 to July 2003, from Portugal to Britain, from France to Estonia, from Finland to Serbia, Franck Biancheri crossed Europe. He crossed the European continent “on foot, by bike, by car, train, plane …”. He traveled more than 150,000 kilometers, out of which he covered 40,000 by car within 8 months!

According to Franck Biancheri, Europe was not Brussels nor Strasbourg, but it’s where the people are, Europeans, citizens, civil society, those who live European life with its daily constraints (certain liberal professions, such as dentists, submitted to the European bureaucracy …), those who profit from Europe and its programmes, ERASMUS students or Carinthian farmers who know more about the CAP (Common Agricultural Policy) than any European official.

Franck Biancheri met nearly 10,000 Europeans during 300 hours of debate and exchanged ideas in all possible languages, including the language of deaf-mutes in Lithuania.

The 15 proposals Vision 2020, published in 20 European languages, offered an ideal base, innovative and citizen oriented and nourished the debate with those European citizens who were wondering “Where is Europe going?”, those who think they have a say on the possible responses.

The balance of the marathon is eloquent, and speaks for itself regarding the interest that people have always shown in Europe, in its future, their future:

After that first marathon, the proposals had been reworked in the form of 16 proposals, giving the Newropeans the chance to rely on them, point by point, in order to define its trans-European program for the European elections in 2009.

This would have been done within a trans-European group, allowing the definition of a truly European approach and will be adopted by the Newropeans Agora, bringing all members together, no matter their national level.

Previous: Demon-etisation: India opens with a fanfare the ball of the fiscal QEs (GEAB, Dec 2016)
Next: Marie-Hélène Caillol: “They destroyed the EU” (interview by la Vanguardia, 30/12/2016)