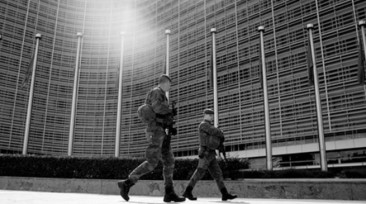 Posted by: Sophie Berger in Franck Biancheri Network 09:21 AM

American Election – Brexit – Euroland – TTIP – Turkey – Russian Sanctions: What future is there for the European Commission within the big redefinition of the Transatlantic Relationship?

Since its creation, the Global Europe Anticipation Bulletin has been designed among other things to inform European public opinion and decision makers about the fact that the global geopolitical reconfiguration vitally requires a profound change of the EU. The United States, structural associate of the European project since its origin – but mostly since the fall of the Berlin Wall – has also changed its role and place in the world. And now, with the global systemic crisis, its transformation emphasises even more the EU’s urgent need to adapt; in terms of its nature, purpose and external relations. But most of all, its need to reform its most emblematic administrative body, the European Commission.

2016-2020 – Birth of global governance alongside the emergence of a new currency: new SDR paves the way to Globalisation and impacts the American dollar
The world has been seeking a substitute for its reliance on the dollar since 2008. The dependency has been so strong, that it has taken almost a decade for a solution to be drafted. Strangely, this solution came from an institution perceived by some as obsolete, until China took the trouble to bring it back in from the cold. After long delays over the fate of the international monetary system, it is ultimately an old tool created by a Washington institution… (Read more in the GEAB 107)

Regional economic unions (2016-2017): Between Apparent Failure and Underlying Recovery
It seems that everything is going wrong for regional integrations. South America’s MERCOSUR trading bloc has completely stopped functioning, due to the marginalisation of Venezuela which currently holds the presidency of the Common Market, but that no one is following anymore. Another alliance currently chaired by Venezuela, the much less known NAM (Non-Aligned Movement), is also not functioning for the same reason: summit cancelled, frozen agenda…(Read more in the GEAB 107)

Electoral calendar 2016 – 2017: Big congestion at the national level
Last June, a new section was created within the GEAB bulletin with the “Political Anticipation Calendar” which recurs every 3 months (complete version expected next month). Nevertheless, for this month, we wish to bring to our readers’ attention the density of the election/referendum calendar of the EU in 2016-2017 and draw some conclusions…(Read more in the GEAB 107)

and support the activities of Franck Biancheri networks

Previous: With the Apple case, Europe does not call into question the optimization, but the fiscal dumping (Leap2020)
Next: Two examples of new key EU security interests linked with next US elections (Franck Biancheri, 2004)