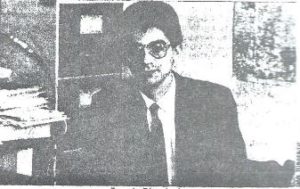 From the birth of an association to its first congress, especially one comparable in size to EGEE 1, there is often a fairly long time that elapses.

EGEE breaks with this “natural law”. Its first congress will coincide with its first six months of existence. Would this extraordinary evolution come from a different nature of EGEE? Certainly.

If this is so, it is because we wanted it to be so. EGEE has decided to be a movement where being European is not a position of meditation but where being European is acting for Europe. It is no longer a question of reflection but of giving the means for action. We believe that it is now time to make the citizens the real driving force of the process of community construction. And our analysis seems right because EGEE1 would have been impossible if we had not met an aspiration on the part of the student world and young people in general.

EGEE1 would also have been impossible if we had not found, in the European political class, particularly the French one, majority and opposition combined, a desire to help us; this unanimity proves that there is a powerful European feeling among the population but which unfortunately only materialises negatively.

Being European is not a plus! On the other hand, not being a European is a defect. And by this observation, one of the missions of EGEE is defined: to transform Europeanness into a positive feeling, a vector for action.

The thing we regret the most on the eve of EGEE 1 is the lack of awareness that companies have of their interests in Europe. Those who have agreed to help us are really the exceptions. However, to improve its image and to appear as a society in tune with its times and, above all, its future, Europe is an ideal means.